About The Quest Potion Situation...

Okay so I know there is a lot of controversy surrounding this sudden change that took effect a few days ago. The one where quest potions can no longer be purchased with credits. I can understand both sides of the argument as to whether it is good or bad. Now let me explain to you why it is both.

Obviously, I'm sure there are not many people who are quite happy with the fact that the change took effect with no prior warning. I, myself, was actually pretty disappointed as I had just coincidentally an hour before contemplated buying at least 10 as a bundle since I was buying them everyday anyways. I of course ended up not buying them and 'put it off for later,' and come to find that my game was somehow missing the credits option to purchase the potions. 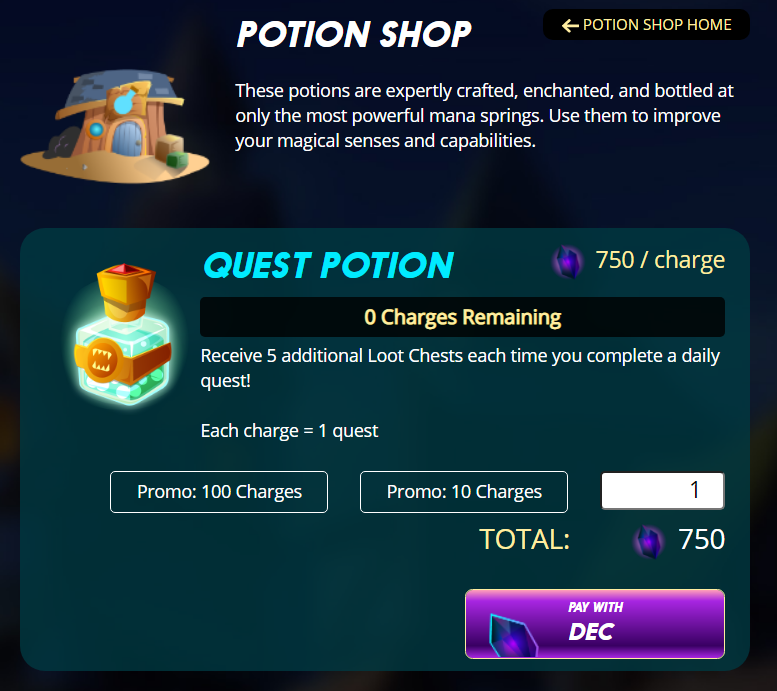 The other huge factor in the community's disappointment with this change is the difference in value (currently) between credits and DEC. DEC used to be valued at $0.001 to be equal with credits so either or would be a viable spending option, until the game gained some traction and the price of DEC started to climb, creating a pretty big gap in value from the still $0.001 credit. At the time of writing this article, DEC is valued at approximately $0.0074. That is worth over 700% more than it was intended to be!

The removal of the credit option means that you must spend your DEC to buy these potions; with the amount of DEC the potion costs staying the same. Which is the problem here. You are essentially paying $5.55 per potion, when an hour before the change, you were spending $0.75. This, in turn, has set a pretty bad image in the community's eyes as, at face value, it appears to be a huge money-grab.

Now, I am in no position to claim whether it is or isn't, but I have spent plenty of time reading through the official post and going through lots of the comments of user's opinions. First, the change does have a pretty good reasoning behind it (potentially the neglect of a warning too). There are plenty of users who create multiple accounts (which is not against the rules) to get many different chances at rewards. This is viable, though the developers noticed that there was too much ease and profit of doing this, which would be rapidly throwing more DEC into the mix and inflating it. However, under the surface there are also plenty of bot accounts created by some users who purchase the initial spellbook and earned massive profits off of gaining lots of DEC very quickly, also inflating the token.

So as a collection of my opinion and many others I saw whilst researching, I believe one of the most viable ways to solve this issue in the near future is to make the DEC cost of the potion variable and adaptable to the current price of the DEC token. This way, the developers can keep the $0.75 value on the potion, and users will only be spending $0.75 worth of DEC each transaction, whether it be 100 DEC or 150 DEC etc. Because, realistically, who would spend that amount on a single quest potion at this point in time.

Still, no matter what happens, it does prove that the game is growing at a rapid pace, and as a result of that issues such as ease of botting can be somewhat flushed out. I'm sure the developers have/will have a plan that the majority of players will be happy with, they just need some time.

What are your thoughts on the issue? Do you agree or disagree with my opinion? Let me know!

Check out some of my recent well-received and informative posts!

Also, if you are new to the game and haven't started yet, consider using my affiliate link to sign up! Anyone who uses my link will receive a 100 DEC bonus sent from me to their in-game wallet as a thank you!

If you have read this far, feel free to follow me for consistent posts and updates from an experienced writer and new player!

I had 9 potions left when they pulled the plug. My loot chests were terrible and no cards so I'm going to save my last 6. I will play for DEC but won't claim my daily quest until new reward cards are dropped. But I'll buy potions if the price comes down. They are the only fun in the game for me as I learn.