@uyobong 73
about 2 months ago
LeoFinance

Before I go into the body of this post, I want to quickly tell you that in the just concluded Rabona season 49, I earned a net reward of 21,853,070 RBN tokens worth 1.748 HIVE with an additional 0.711 HIVE from the Rabona team for finishing Third on the league ranking with 62 points. The rewards totaling 2.459 HIVE is worth $2 at the present exchange rate. That means that I earned $2 over the last 7 days for spending 10 minutes daily to set formation, train players and see my score line after each match auto-played on Rabona game. 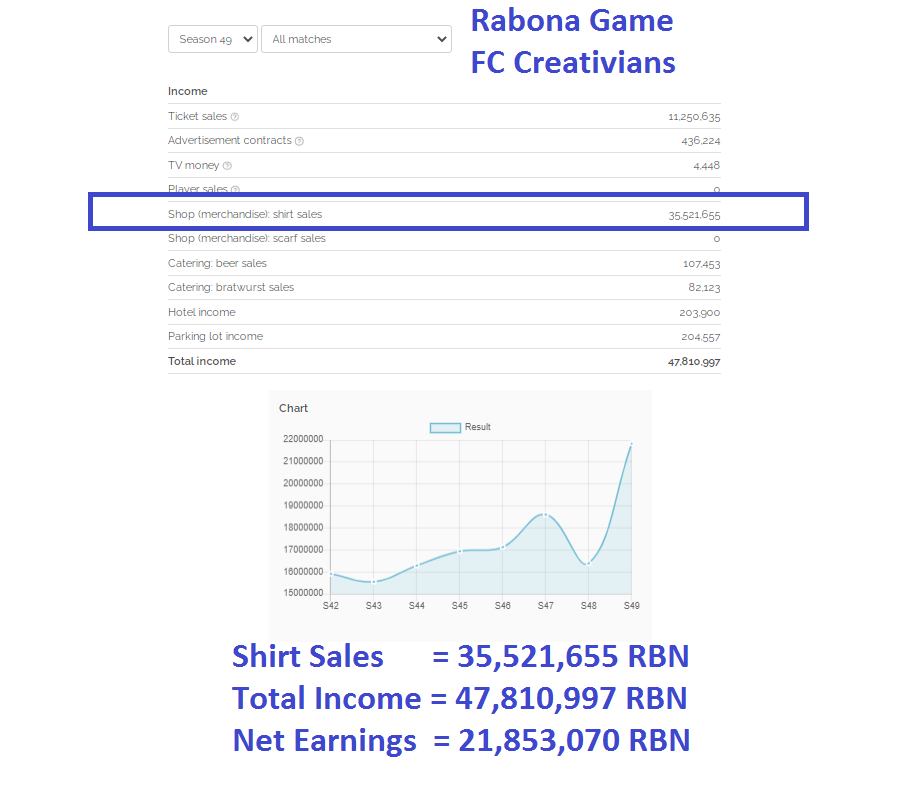 Rabona is a soccer manager built on the Hive blockchain and I wrote extensively in this post why we all need to engage Hive games. As at today, the 50th season from its inception just started and each season takes like 1 week. It thus interests you to see that a game that us just barely 1 year old is giving out such tonnes of rewards to its players. I have been a constant league 2 player for several seasons now and earning as much as $2 per season is just about a quarter of what a player in Season 1 or League of champions earn. Top players there should have a net reward worth $10 and more.

Trying to analyse my rewards for this season, I noticed that sales of sports memorabilia constituted as much as 74% of my total income for the season. Specifically, my team has not been making sales of scarfs for many reasons now, only shirt sales to fans is what we earn from. It rounded up to over 35 million RBN token over the 30 matches my team played. It's interesting to see as things are rounding up as my team gets to grow in this game. Earlier in the game, my major source of income was from ticket sales until when I increased my ticket price some seasons ago and it led to a drastic fall in my fanbase and stadium utilization down to bout 30%. My net earnings then reduced far below 20 million RBN that was a minimum in the last 20 seasons.

Glad to have seen that the over 50 million virtual fans are pooling as much as as 35 million RBN into my wallet through the purchase of my team's shirts and that's making me richer by the day. At the present exchange rate, there's no plans to sell the RBN token as we are still in the shadow of things to unveil within the Rabona game ecosystem. With the anticipation for the roll out of Rabona tournaments heightening, we can say that Rabona Bank would become a reality within the first Two quarters of year 2022.

Since after the first 10 seasons, my team has been running on a profit. With over 500 million RBN tokens earned, I would say that things are getting more exciting by each day passing. It was not really a tough season for my team as we are daily growing in player capacity by each season passing. FC Creativians finished on the top Third spot on the league table with 62 points. We can build on that to scale for the top spot in the next season so we can have another bite of league 1 which means more earnings. 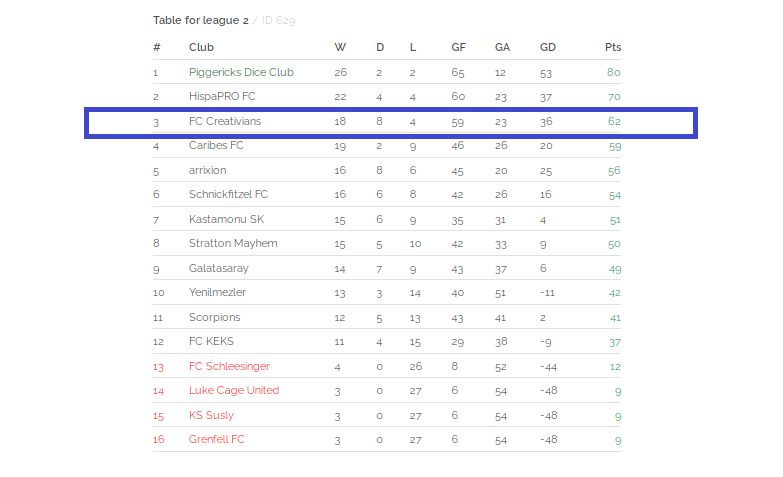 To wrap it up, we can see that we're not just creating contents on Hive, we sell virtual products and are earning big. With Rabona game, we sell players, Sports Memorabilia, food and even parking spaces for match attendants. Looking forward to when my fans would reach 100 million and my stadium capacity doubles from its present. Cashing 50million RBN per season would definitely be sweet.

Sincerely, there are no regrets sticking with Hive, it gets better everyday.

@automaton 64
about 2 months ago

I just recently begin playing. Fun football SIM. :) Might become a RBN billionaire in the next month.

That's great. Yeah, anything is possible. I had reached the Billion mark then sold some of my tokens weeks ago.

Cool, great to read more about Rabona. I haven't heard much about it yet. How large is their reward pool each season?

The reward pool varies per season depending on number of active players and their points/rankings at the end of the season. For Season 49, over 300 HIVE were distributed. SOme accounts got as large as 12 HIVE.

This is great to know, how much little time well spent on meaningful stuff can yield outstanding result.
I knew very little or nothing about Rabona and other hive games but going through your post there is do much of passion for it and I will rise to the faith of this greatness. Thanks for having me

I just picked up playing in season 49 and have been impressed with the game so far. It's nearly everything I wanted the SPORTS game to be when I was looking to build that out it just doesn't use SPORTS as the base token :P

I'm no where close to profitability for my club yet. I'm hemmoraging $7M a season but I'm playing in League 2 after just starting. I need to get cheaper in house talent brought up so I can drop some of the large contracts I'm paying out right now. I spent over $1M scouting players this season but I still need to get my buildings beefed up.

Interesting to know you're playing Rabona too. Engaging the game would help give an insight to where there can possibly be a synergy with the Sportstalk community.

I held off at first just because it was so close to what I was building for SPORTS at the time that I didn't want to end up copying concepts based on playing it. After their success and the overlap of project concepts I stopped working on the SPORTS game and figured it was time I could play some there. It's well done and is much more my type of game than say Splinterlands.

I'd love to find ways we could work with Rabona. I'm not sure what those would be yet but I'd love to see more SPORTS users playing there. I know a lot of our users are huge #football fans and would probably enjoy the game.