This is very important as it will make Gods Unchained players to compete daily in ranked games.

By playing games (and winning them), you will earn fragments

$GODS rewards are calculated as:

How to claim those?

Directly in the game UI Menu as shown below:

How many $GODS tokens are given out daily?

There is a formula with the purpose to rebalance the exact amount of tokens given out
It will be starting with a minimum $GODS Rewards of 14,000 and could go up to a maximum Daily $GODS Rewards of 30,000.

They have shown some additional screenshots highlighting dashboards to track your past and present performance. Cool right!? 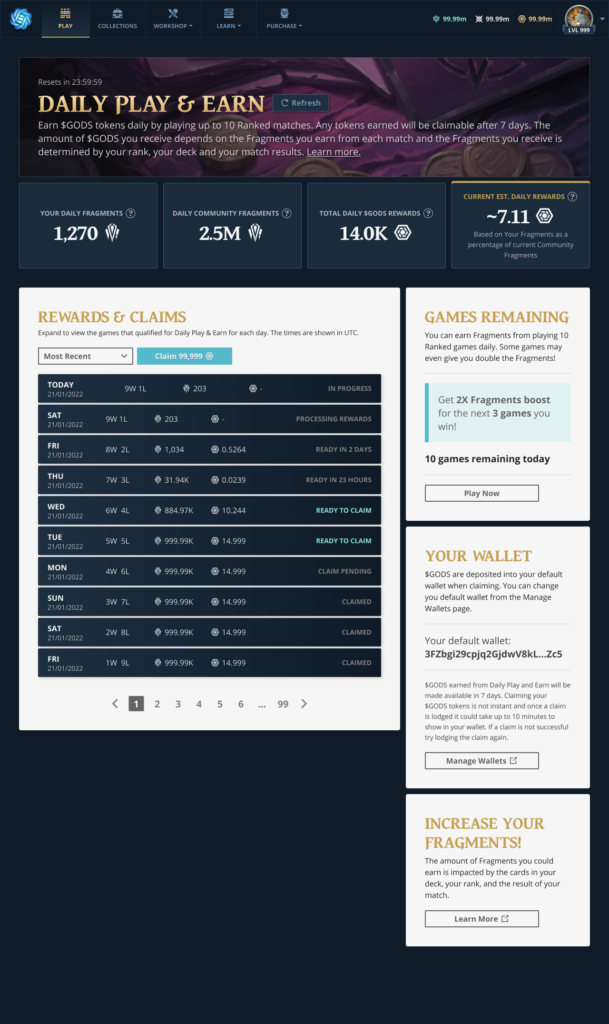 I played it for a while. But not anymore as it's too difficult. There's new card's out too often. The cards that you buy don't have a chance, they too strong !

Thanks for the comment but I actually believe the opposite. With more cards, prices of decks to be in the top 100 players every weekend is a slow as 0.1-0.2 ETH. It used to be >1 ETH.
Also competitive decks are more diverse than ever.
I would agree on one thing, it has become harder to win games as the average player is much better than it used to be.

...it has become harder to win games as the average player is much better than it used to be

...it has become harder to win games as the average player is playing still-broken toon Death, Nature and mage decks

There is some truth to this but Aggro Nature or War are also competitive.

The decks I have that win the most are almost always based around strong, free cards I got in packs I got each time I leveled up.

You can go to https://gudecks.com/ to see current meta decks and stats and such, it's the site I use the most.

Gutools and Cardsunchained are also great sites you should check out to learn more and improve if you want to do that.

This daily paly to earn may be good news for Gods Unchained. I abandoned this game in favor of Splinterlands, but I might as well think about returning to play some games. Thanks for the information you gave us