@yablonsky 53
about 1 month ago (Edited)
Splinterlands

Soooo, I have some exciting news to share with you all regarding my Splinterlands progress. If you have been keeping up with me then you know that I have been struggling for the last few weeks, today I show you some of my achievements. I want to talk a bit about my Daily Quest Rewards, and the Leaderboard progress from the current season and last season.

Today's Daily Quest is the Death Quest. To be honest it took me hours to complete this Quest as I would go on a winning streak followed directly with a bigger losing streak. I finally completed the Quest and it resulted in me winning a Level 1 Gargoya Lion. Gargoya Lion is a Reward Card from the Neutral Splinter and at the time of writing this post is worth only $0.13. 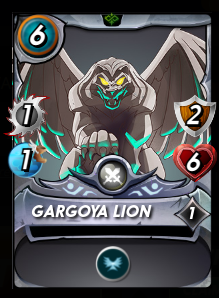 The new gargoya creatures have all developed distinct personalities and gone separate ways. Many of them cannot be controlled by any authority, but others among them are natural leaders. The one with the most commanding presence is the Gargoya Lion that used to perch just above the tower’s drawbridge as a guardian. Not only is the lion the largest of the gargoya race, but he appears to be the strongest as well. The fight against the Chaos Legion has called him to Praetoria, where he now waits with a small band of gargoya followers. Last season was a bit rough on me as you can see below, I couldn't win any battles due to low experience and lack of knowledge of the cards and positions. I finished last season amongst the worse of the worse with an incredibly low rank at 427,180th place and with a rating score at 423 (barely Bronze 2).

This season has been a little different so far as I continue to rise in ranking and increase my rating. Ranked at 7033rd position and with a rating of 953 I must admit that I'm stoked. I will continue to play more after my Energy Capture Rate increases.

Thank you all for stopping by and reading my post, Good Luck with your Splinterlands journey...

Thanks @lordanquek, I will check out your post.
!PIZZA

Congratulations @yablonsky! You have completed the following achievement on the Hive blockchain and have been rewarded with new badge(s):

Just keep grinding and you will get there. Progress is progress no matter how small it is. Even the largest buildings are built brick by brick. Keep at it and you will achieve all your goals.

The grind does not stop 🚫...
Thanks @squirrelacus, for you encouraging words.
!PIZZA

This is progress. Is it possible to tutor me on Discord? Or Telegram perhaps? I just have a few questions.

Thanks @deraaa, I would love to tutor you but, I want you to be successful so, for that reason I don't think that I would be the best tutor for you at the moment. My advice to you is to take advantage of the in-game practice to learn more about the abilities and positions all while building your collection.
!LUV
!PIZZA

I just want to ask a few questions, not get the full tutorial. It's cool though. I'll keep researching.

Cool, I will do my best to answer any and all questions that you may have.

Nice to read from other people struggling to make it in Bronze!

The struggle is real, I'm currently in Bronze 1 and it's nice to earn with every victory.
!PIZZA

Yeah that is the goal, to get out of Bronze III and make some rewards.