agr8buzz in LeoFinance • 2 months ago (edited)

Some would say it's a healthy correction and for the most part I have to agree. Yeah it's a big one, and it might not be done yet, but I don't think it's the end of the run. There's just too much data to support the run having more legs to come. I think it's the recovery that I'm most interested to see. More specifically what will BTC dominance look like upon return of the market.

Media and content creators need things to latch on to, and unfortunately this past week since Elon's tweet, that "thing" has been negative press about BTC's energy consumption. 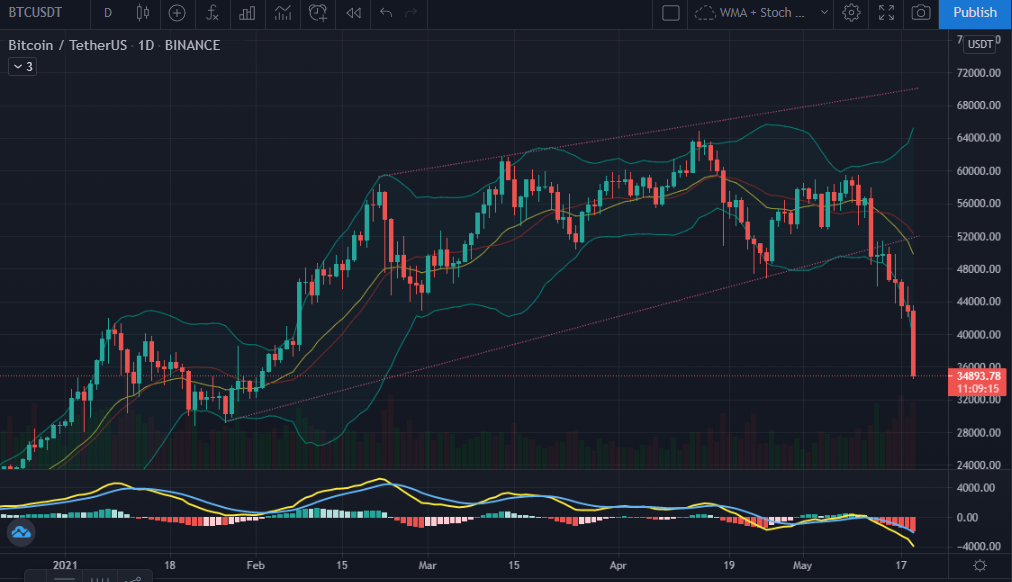 BTC off the cliff!

Bye, see you again sometime time soon I hope! Don't forget about us...

With nearly a week of FUD we're now seeing a massive sell off. SO I don't blame Elon directly, I think he just threw the first stone.

I'm hoping that this kicks starts Alts into high gear upon return of the market. But wow this is a big correction and Elon will take flake for this.

How about Tesla shares?

Opened today down nearly 5%, and now down 9% since the tweet. 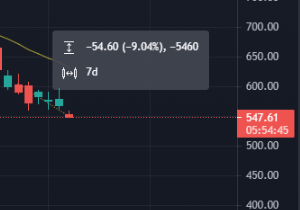 If anything these dips are good for shaking out weak hands, and with every correction the market becomes that much stronger,..right?

Don't fucking kid yourself this is a money making game with magical internet money. We can talk all day and all night about these great projects with use cases and whatnot but at this stage non of that matters, this is a game, the unfortunate thing is people like depend on it for income.

It is what it is, and at least I know what it is!

So yeah these dips hurt a bit for those that are long term holding and crypto is part of their wealth building strategy but it's just that, wealth, or money. Nothing more and nothing less, and in the grand scheme of life the argument could be made that it's insignificant.

As long as DOGE, a coin that does literally nothing occupies a spot on the first page by market cap, this whole thing whole crypto thing is kind of a running joke right?

Like I said before, Imagine there was a company trading publicly on the New York stonck exchange, one of the largest companies in the worlds by market cap and that company did nothing, no head office, no products, no solutions, no nothing. Imagine it? NO you CANT!

China FUD is also playing a role in the crypto crash, and doesn't it bring back memories of 2018? I think we can say we've now reached the China FUD phase of the bull run. I guess this was bound to happen. Anything which goes up comes down with the same speed. Bitcoin was growing crazy in last few months due to the euphoria over Tesla and Musk. But purely going by the economics the speed of the growth was crazy, now I guess this is a simple economical correction we are witnessing.

A pull back was going to happen with or without Musk.

With the economy heading into the dumps, I'm sure crypto will turn around soon.

Gem's making her bets in the USD$30k range.

A correction was expected to happen at some point with sudden influx and quick rich mentality coming in into the market.

Elon just ended the party sooner. Now we await and see how many people shakes off and the extent the dip goes.

BTC should re-bounce again. For now, we hold for dear life