dalz in LeoFinance • 3 months ago (edited)

China has banned Bitcoin mining recently as most of the crypto people know. A major share of the bitcoin miners were located in China and they need to move their equipment from there. Since chinese miner are shutting down this is causing the hash rate of the bitcoin network to go down. 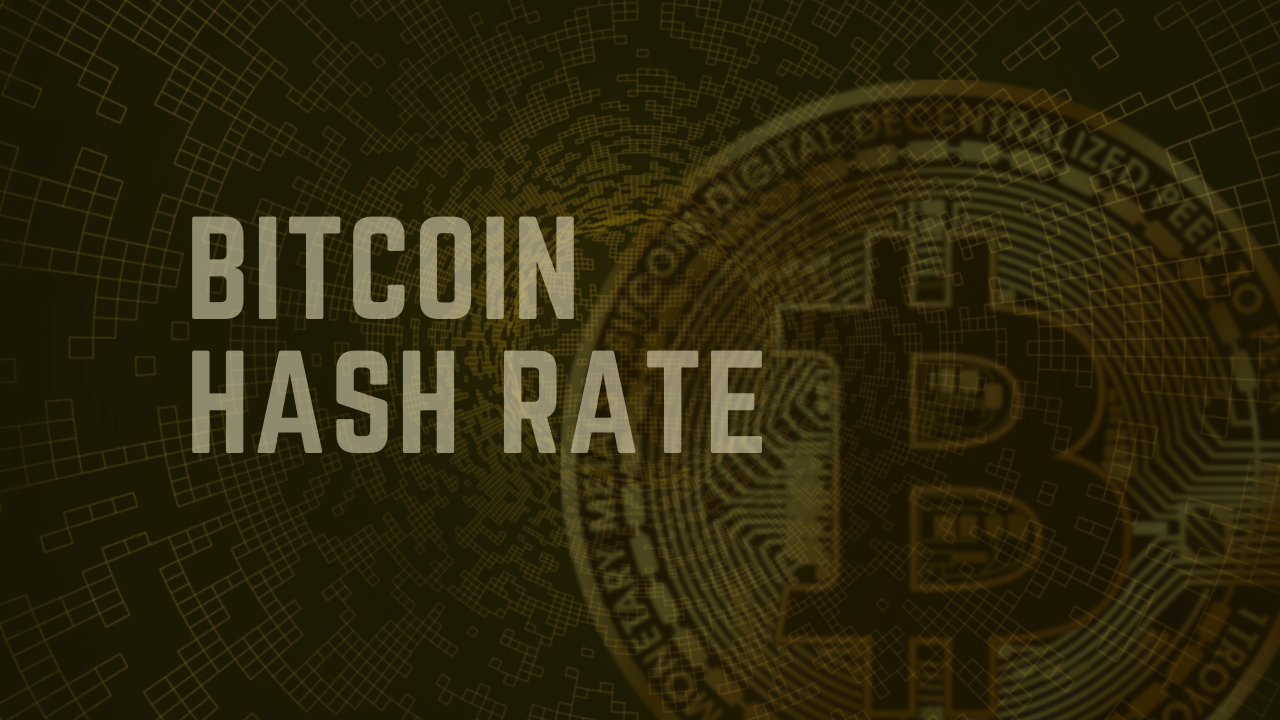 Here we will be looking at the long term data for the hash rate of Bitcoin and then take a closer look at the last month and year, to see the effect of the Chinese ban. For context we will have a look at the activity on the network as well.

The data presented here is mostly gathered from the blockchains charts.

First the chart for the long term data. As we can see the hash rate has been increasing steadily in 2019 despite the changing prices. In 2020 the growth continued and the same goes for 2021, up until recently when we can see a sharp drop in the last month. 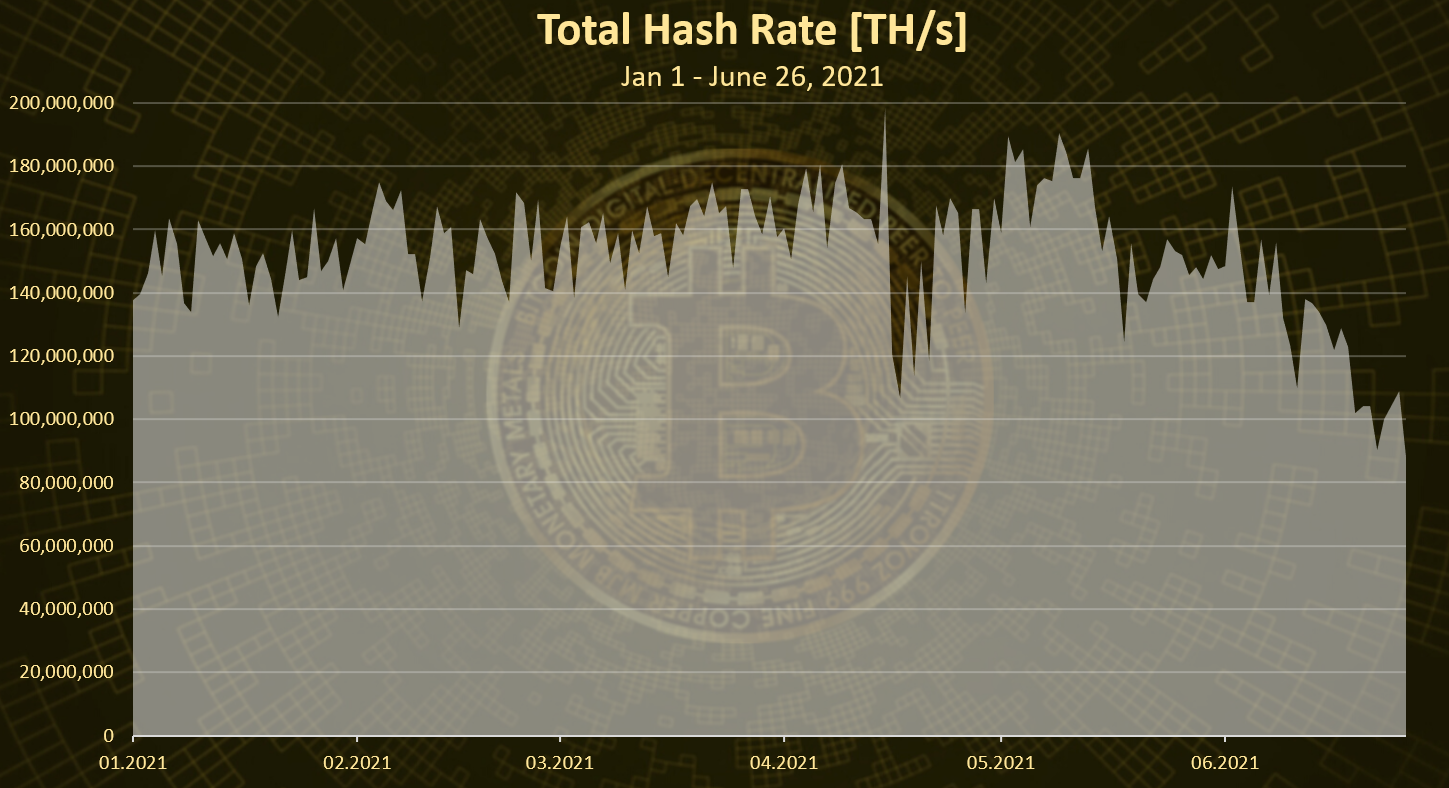 As we can see from the chart the hash rate has been growing up until May, when it had a drop, first most likely because of the prices going down, but then a more significant drop in June.

Zooming in further just for June 2021 the chart looks like this. We can see that at the begging of June the hash rate was around 160M [TH/s] (million tera 😊) and in the last days it has dropped to under a 100. This is more 30% drop in just a month. Quite impressive.

Before the start of the decline, at the beginning of May the network was going for a 200 MT, and now is at around 100. Will be interesting to see how much time would it take for the miners to plug in again and push the hash rate.

For context let’s take a look at the active wallets in 2021. Here is the chart. 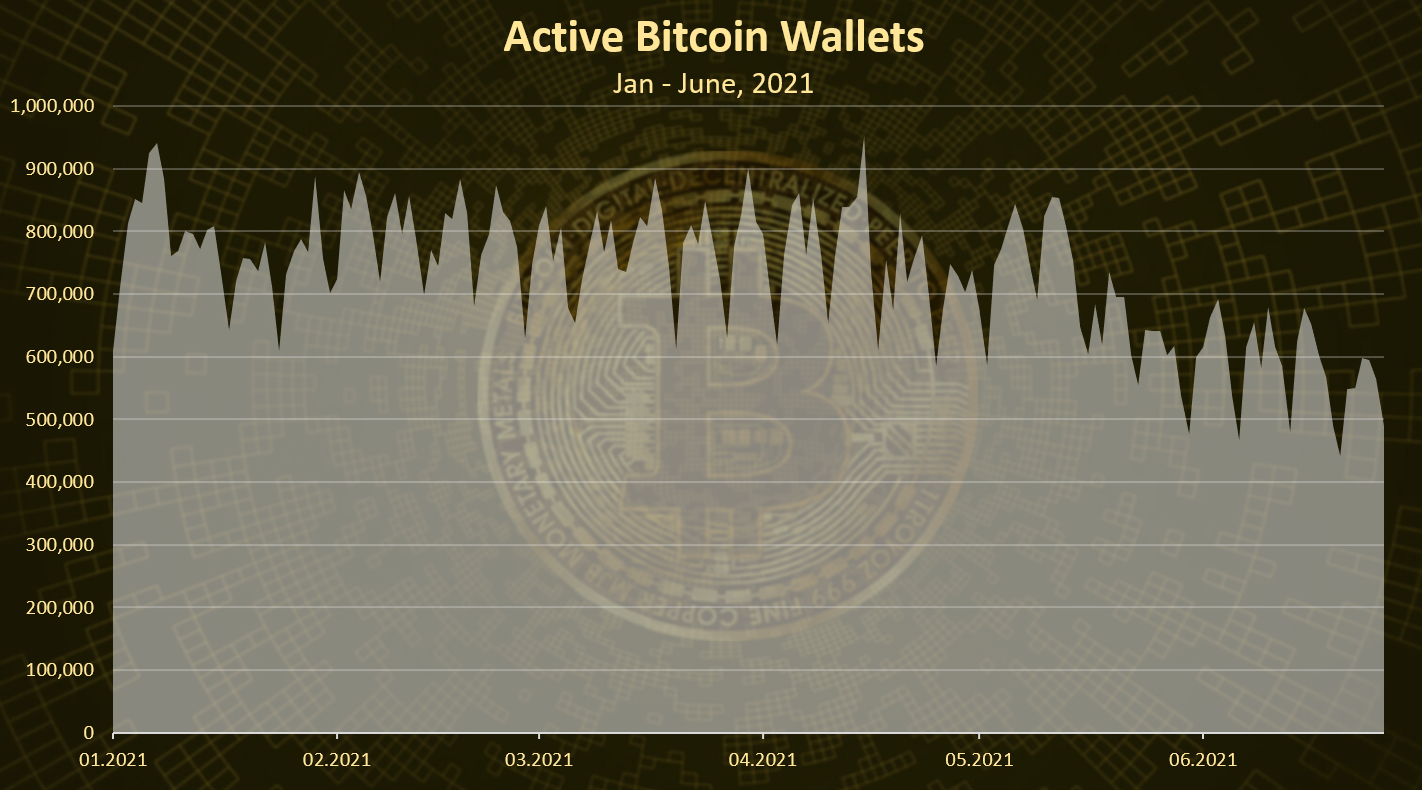 At the begging of the year Bitcoin was pushing towards a one million active wallets per day, going more than 900k on a few occasions.

Then in May the numbers went down, as the price dropped as well, and it has been in a slow decline since then.
The number of active wallets didn’t drop as much in June as the hash rate. We can see that the impact on the miners is bigger then the active wallets.

Another parameter for the activity are the numbers of transactions. Here the chart. Here we can see a slow decline in the numbers of transaction over the whole 2021, with maybe just a slightly bigger drop in May. This is an interesting data as it shows that Bitcoin transactions are not following the price that much. If they were corelated with the price we should see a chart with the transaction increasing up to the beginning of May and then a sharp drop. But this is not the case.

Overall, we can notice a clear impact of the hash rate from the Chinese ban. The hash rate of Bitcoin has dropped 30% in June, and it is almost at half from the previous ATH. The hash rate as a parameter has been quite resilient to the price fluctuations in the last few years and has kept growing up until now. I personally would expect a fast recovery in the next few months as soon as the equipment is moved around the globe and new mining farms are setup elsewhere. We will need to wait a bit to see would it really turns out this way.
The other parameters, as the active wallets and transactions have also dropped but not on the scale as the hash rate.

Its interesting times for the Bitcoin network and yet another test that it is going through. Probably somewhere half of the miners are forced to quit operations, that for sure is a big thing, but the network still continues to operate normally. We will see how the hash rate continues in the near future and will it be back to the previous levels. That will be a positive sign probably and the market will react in a positive way most likely if that happens.

Hey thanks, I was sharing some links on redit beffore, but was having a trouble with permissions etc .... will give it a go again on the above

Miners moving out of China is the best thing that could have happened to Bitcoin and for freedom loving people everywhere.

The concentration of radical freedom miners in a totalitarian dictatorship that hates freedom was a major risk for Bitcoin and now it is gone.

China just cut itself out of an important part of the future of finance and will suffer accordingly - this is also great.

I realy cant say why they did this .... probably just an effort to keep control over people, not much of an economic sense...

A major reason for this has to do with the integration of the power grid in China. Now that the grid is more connected the miners are directly competing for power with other industries which the government does not want. Previously the miners were tapping into stranded power generation which would have been wasted otherwise. Some local government officials were also making money under the table off of selling electricity to mining farms and the central authorities are also cracking down on that.

El Salvador would be home for bitcoin miners, the country offers geothermal energy for mining bitcoin.

the rate is still more then double then in 2019, not sure why there was a drama about it.

also that first big drop for couple of days was i think because of Chine miners had some problems with a power plant or a mine.

Does this mean it's profitable for small miners to mine again?

Probably not with your computer :)

Thank you for explaining what hash rate is. It's one of those terms I see a lot, but I didn't really know what it meant exactly. !BBH

I agree with others... Best thing for Bitcoin! Difficulty levels will adjust and the hash will be spread out more. The thing is now, we need more independent and individual miners. Great write up! Reblogging for the https://coin-logic.com front page feed!

Nice numbers that confirm what every crypto news outlet is saying BUT I have a small question for you.

Did you see any datas on the reallocation of these bitcoin miners? or an update of this old graph (April 2021). I would love to see a better geographic spread of the hash power !

Hey wow ... this pie is quite telling ... havent looked more into this and what data sources are out there ... will be interesting for sure to check it out how it redistribute in the future

Legit they just trashed their economy by doing this. Wanting to have full control over your countries finances and not make it a world wide currency and threaten other counties as well as kicking out business are awesome ways to replicate into a North Korean country working out real well for them(sarcastic tone)

Yep that was my initial thinking .... although some are now pointing out about the energy side of things, miners consuming to much energy, makeing it more expensive for other buissness etc .... probably a mix of more things

I see this as a good sign, it benefits bitcoiners in other countries

I love these little interesting data dives that you do!

All and all I think bitcoin does better with a more diversified mining spread. Although it can take some time for the market and blockchain to adjust.

Thanks .... its a big deal this chinease ban when you think about it .... will see how things settle in the next few months