Ask Leo: Bitcoin - Break Up or Down?

I'd like to ask Leo community a tough question. One that doesn't have a clear answer, but it can gauge sentiment inside the community.

You've probably seen charts like the one below recently and the wedge inside which the price of bitcoin is currently trapped. 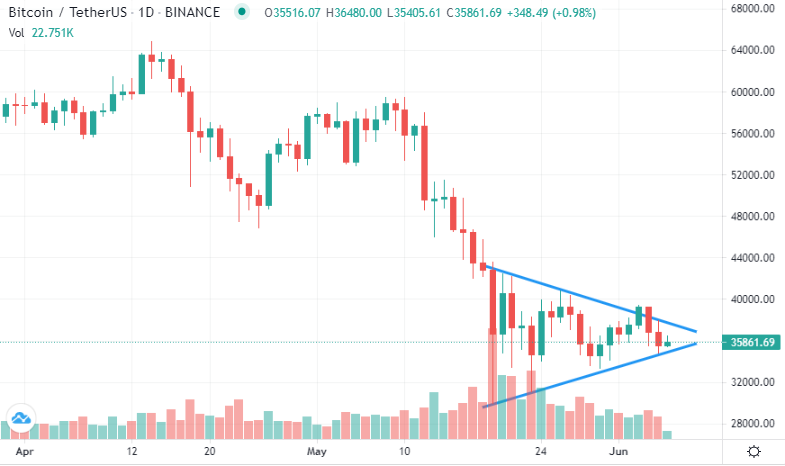 Before the trend lines touch, price will break out of the triangle. Either up or down. The question is which way do you think it will go? Up or down?

Technical analysis gives a 50-50% chance to either direction in these cases.

For long term hodlers it shouldn't matter either way, expect maybe as a buying opportunity if it breaks down.

What do I think? I think it may break up. From the TA point of view, bulls already tried that a few days ago, but they didn't plan well, in my opinion, because the break out was met by the 40k area resistance as well. And was likely to fail, which it did. Maybe they were overconfident, to take out two objectives with one move, and they shouldn't have been.

If bulls still have the strength for another push up, it may succeed this time, because the trend line for the wedge moves lower with every passing day, so away from 40k. That doesn't mean bulls don't have to break the 40k resistance after that, but it will be from the position of power since they broke out of the wedge.

The reverse it's also possible and bears could break down to 30k, which may or may not hold under these circumstances.

Reasons outside of TA that makes me to believe that the break will be up are:

So, how do you see this? Bitcoin will break out of the wedge up or down?

The answer is "yes".

Toss a coin. I am a long term hodler so which direction it goes in the short term is just a fun game to me.

Where will it be in 8 years is the bigger question?

Totally agree! I bought a bit more between 30k and 40k and if it breaks down I will buy some more.

I literally have no clue. What I do know is that we will have a over $100k Bitcoin by the end of the year. Of that I'm sure. Thanks for the inspiration by the way, it's time to have myself an #askleo post.

What I do know is that we will have a over $100k Bitcoin by the end of the year.

This is what matters, after all. The short term evolution could offer us some tiny opportunities, but in the end, it's the big trend that matters.

I agree, it can go either way. I guess it's still early to tell.

That's true. By the time we'll know, we'll have a strong movement in one direction or another.