Splinterlands Assets to the Moon

gadrian in LeoFinance • 2 months ago (edited)

Two areas of the cryptocurrency world saw a tremendous rise to the spotlight during the current bull market: the non-fungible tokens (NFTs) and the decentralized finance (defi). Both holding an immense amount of still untapped potential.

Yet, since the severe retreat of the cryptocurrency market started in mid-May, they were both pulled down as well: NFTs deflated and defi coins don't feel too well either.

Take a look at the chart below: That's the so-called Splinterlands Market Cap Chart, based on an aggregated Splinterlands cards sell price over time. Something @aggroed invented I believe, but it's a pretty good indicator of the evolution of card prices on Splinterlands, although it's not fail-proof (for example, illiquid cards may not reflect the general price movements in the market for a long time).

Now, I wonder... Is that type of chart what many would have expected from - let's say - bitcoin during the FOMO period at the end of the bull market?

Instead we have this: 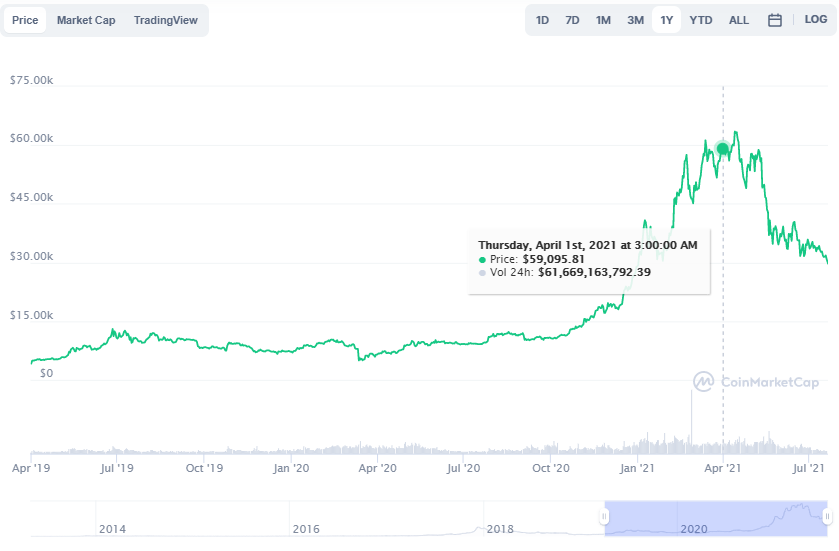 Pretty disappointing for the bulls, but we still have the long term... And the fading hope of an explosive end of year.

So, one has to wonder - especially if not involved in Splinterlands - why does it defy the market? After all, it is a game in the crypto sphere which uses non-fungible tokens.

Use Case and Continuous Development

I'm not an expert in NFTs, but from what I read, those without an actual use case deflated the most. And Splinterlands NFTs all have (or will have) clear use cases.

Then, over time, Splinterlands assets went through harsh market conditions quite well. So maybe it became a preferred method to hold value in a declining market, other than cash / stable coins.

But none of the above would have meant as much without continuous development and releases and clear proof that the interest in the game rises sharply, both at the players and investors level.

The next in line big release for Splinterlands is represented by the Splintershards (SPS). A lot can be said about SPS, and I said it too in another post, but the best way to learn about it is through the white paper.

And one of the components of the Splintershards release is the one-year-long airdrop of the SPS tokens, based on daily snapshots of holdings of Splinterlands assets in-game and on various third-party platforms. Those interested already know the details, but if you don't and are curious, here they are.

Obviously, the excitement for the airdrop pumped the prices. But this is well thought-out. One doesn't receive the full airdrop at once and then potentially dumps it. It's drip-dropped daily for a year.

Growth by All Metrics

This is not the only reason why prices went straight up. The same period also coincides with a high influx of new players at a time when most assets sold directly by Splinterlands are out. The only way to buy them is through the secondary market, thus the increased buy pressure.

This is a wonderful period for everyone who has invested and played Splinterlands for a while. For some, the (virtual) losses on the volatile cryptocurrency assets have been well compensated by the gains in the magic world of Splinterlands.

I don't know if I should be worried. At this point, my Splinterlands assets represent a very serious chunk of my crypto assets, based on recent evolutions, since they sky-rocketed and most volatile cryptocurrencies dove.

Play to Earn and Staking Rewards

Starting now, at the end of July, the airdrop or purchases from the market are the only ways to accumulate the new SPS tokens.

But according to the Splintershards roadmap, for Q3 it's slated the beginning of SPS reward distribution for playing the game, in it's various components (ranked games, brawls, maybe tournaments, except land, which is slated for Q4). So that's another way to emphasize the play to earn component of the game, on top of the already existing ranked/season rewards, tournament and brawl rewards.

At the same time, also for Q3 it's programmed the release of rewards for staking SPS tokens on various players for a portion of the SPS staking rewards.

We don't know if they'll be released simultaneous or not, but if they won't, then we'll probably have another play to earn boost first, because staking rewards doesn't seem to make sense on its own. But we will see.

I've become addicted to Splinterlands again. I'm a little pissed I didn't make it to Champions League (CL) last season, but I didn't push. This season I really want to reach CL. It's been a while since I've been there, and I miss it. :)

Not playing Splinterlands yet? Here's your chance:
https://splinterlands.com?ref=ga-sm

It's free to sign up and try out the game as long as you want. It costs $10 to buy the spell book and start earning rewards.

The thing that's happening at the moment with Splinterlands is a perfect storm... In a positive way... :) You are right about the well-planned rest of the year, and what we are seeing is a clear FOMO in SPS airdrop... If we add the fact that there are no card packs to buy inside the game, we are adding gasoline on a fire... :)

You did a great job with this "review post"!

If we add the fact that there are no card packs to buy inside the game, we are adding gasoline on a fire... :)

There are also much more new players coming in who need/want to level up their cards and become competitive than in the past. That's another buying pressure reason.

The renting system can alleviate some of their needs for competitive cards, but probably some prefer to buy instead.

You did a great job with this "review post"!

Thanks. Aren't you on vacation? :)

Thanks. Aren't you on vacation? :)

Bezos brothers should have tried Splinterlands for a trip to stratosphere and beyond. :)