hitmeasap in LeoFinance • 2 months ago 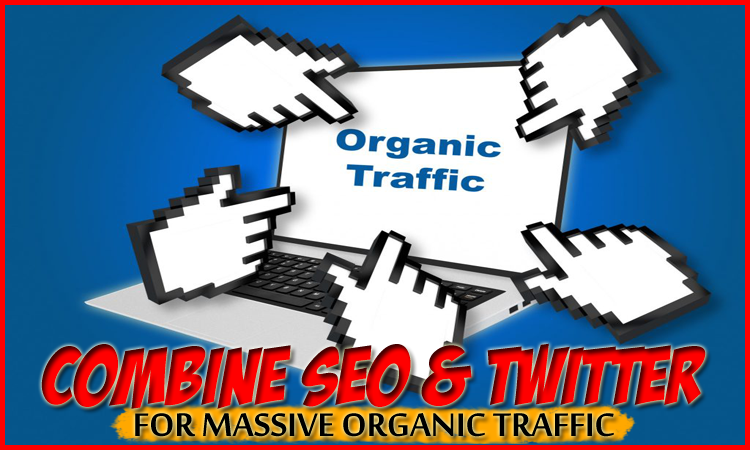 I have published weekly reports for a month so far, reports that contains the keywords that brings the most organic traffic to LeoFinance.io. Within each report, I provide details about the top 10 keywords and the articles that receives the most traffic. I also share the number of keywords that is bringing users to the website. A number that seems to be improving a lot for each week.

Something else you should track is the position of our best performing pages.

And he continued to say this:

I can see that the Andrei Jikh portfolio blog that was teetering on slipping down to page 2, is now solidified on page 1 and up to P5 (do a search on incognito).

We want to keep encouraging people who create related blog posts to always link back to the original that already ranks.

For example, this Andrei Jikh crypto portfolio blog is designed purely to expand on and push the original to a higher Google ranking.

These Are The Reports

It's A Golden Opportunity

Anyone who's struggling to come up with things to write about, people who's interested in improving our rankings or people who've just recently started to learn more about organic traffic, optimized content or even twitter marketing, this is perfect for everyone. The reports are superb for anyone looking for things to write about or people wanting to help LeoFinance grow naturally.

We want more content in general because more content equals a higher chance of having articles ranked on search engines. We also want more marketing in general, as this leads to more eyeballs on our site and articles, but it also result in bursts of traffic. Social signals like retweets are great in terms of strengthening our already ranked content as well, so we want more of everything..

The most important part in all of this, is that we want people to create related blog posts and to always link back to the original that already ranks. That will help Google to see the post that already ranks as an authority on the topic, which leads to more organic traffic over time.

While this is crystal clear for some, it never hurts to describe and explain things further. Follow these 3 simple steps and you're off to a great start:

@forexbrokr does an awesome job with this. Just look at his recent "Is it Altseason? The Altcoin Season Index says August 2021 is Bitcoin Season" post he published because of the "altcoin season index" post that's one of the articles that brings organic traffic to LeoFinance according to the latest report.

I have talked about this previously as well, but Twitter is an amazing tool for us to use. We want traffic and Twitter gives us both bursts of traffic and organic traffic if we use it properly. Bursts of traffic is immediate traffic we get because of the tweets/retweets we make. We get more eyeballs to content and to LeoFinance itself by tweeting about it. That's a good thing.

However, instead of just blasting out a bunch of random tweets with nothing but a link to LeoFinance-articles, we should put some more effort into it. I'm just talking about a few seconds extra for each tweet, and the results can be massive for us in the long haul.

These are examples of my four latest tweets: 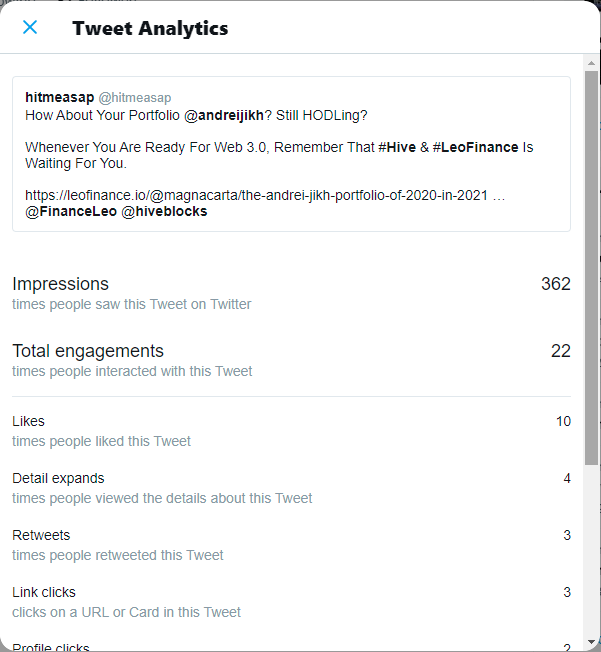 andrei jikh portfolio is a keyword that brings a lot of organic traffic to LeoFinance. It has been a top keyword for several months already and @magnacarta did exacly what I've been talking about previously in this article.

He made a new post with fresh content and he made sure to link back to the original article. You can find the article here: The Andrei Jikh Portfolio of 2020 in 2021.

Instead of making a post about Andrei Jikh, using the same keyword and all, I did the "second best thing", which is something I want to see literally everyone doing. I made a tweet and tagged Andrei Jikh himself with a question about his portfolio. I basically used the keyword in a different way while I mentioned Hive & LeoFinance as well. 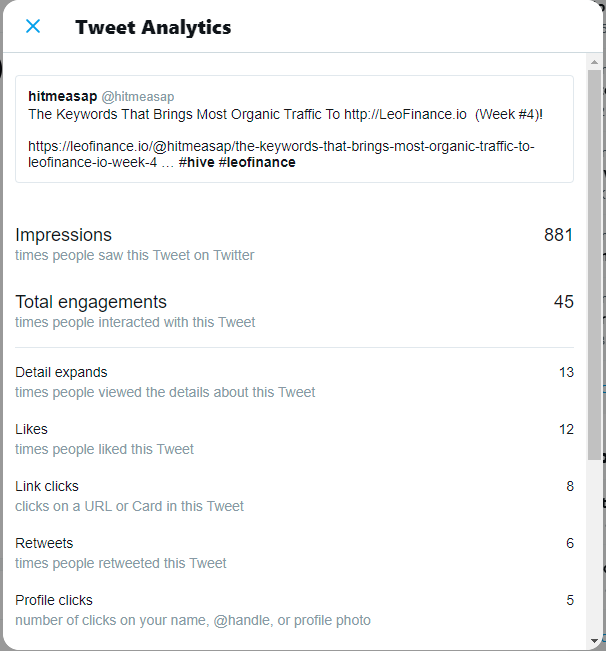 I don't have any in-depth explanation for this one. It's basically just a simple tweet including a link to my report. I used Hive & LeoFinance as hashtags, but this doesn't have much impact besides the potential bursts of traffic to the specific post. 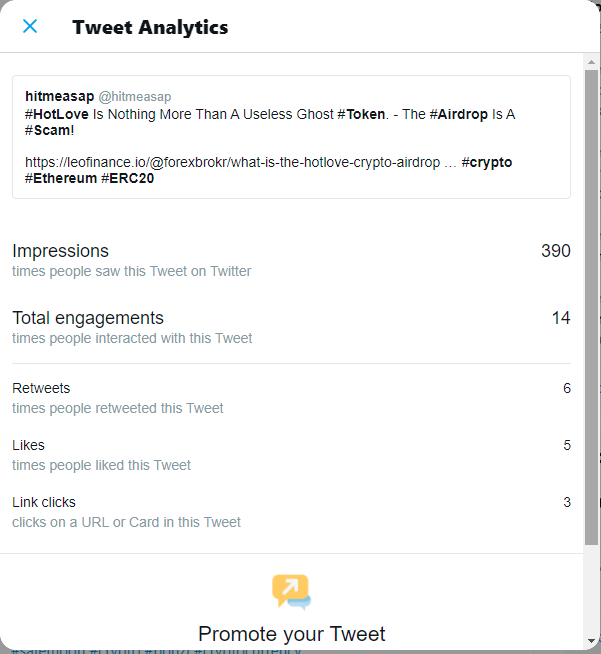 I use the same "system" or "method" as I showed you previously for this tweet. A decent amount of hashtags and trying to have a "catchy" message. I do this because I want exposure. I want likes and retweets. These are not links to my own articles so I am not looking for rewards in any way. I do this because I want to help the original article to improve or strengthen the current rankings. 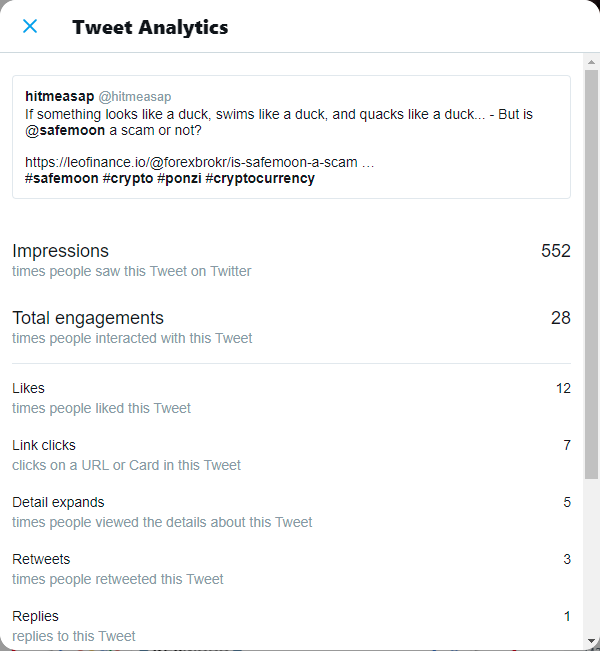 You can see the exact same method or system for this one as well. This time, I didn't even bother to come up with the actual message myself. I copied it from the article, entered a couple of relevant hashtags and tagged the official account in hopes of more exposure. I don't mind asking them if they are a scam or not. I am looking for the buzz. The hype. I am looking for the organic traffic that will come because of the social signals.

Thanks for the mention! Besides other posts I may write here and elsewhere, I'll write posts to strengthen the Page Authority of the LeoFinance pages which rank high on the SERP.

Everything I write should be using SEO to build rankings for myself and others, but in the case of the pages already ranking high or even reaching Page 1, I will post to pass along the link juice*.

That's awesome! I'm really glad to see people showing interest in optimized content and rankings. It's something we've been ignoring for way too long.. But we've had amazing results lately!

We all have a part in this. Nobody can do it on his or her own. We simply need to keep moving Leofinance.io up the rankings. If we can do that on a few keywords, it will help with the others.

Let me tell you something you already know. The world ain’t all sunshine and rainbows. It’s a very mean and nasty place and I don’t care how tough you are it will beat you to your knees and keep you there permanently if you let it. You, me, or nobody is gonna hit as hard as life. But it ain’t about how hard ya hit. It’s about how hard you can get hit and keep moving forward. How much you can take and keep moving forward. That’s how winning is done!

SEO is like this. It's constant, the need for it doesn't ever end, and we keep moving forward with it. Unless we catch lightning in a bottle with some post, every little bit helps, and it's only over time that the results pay off.

I have tried to combine the Markdown suggestions of @taskmaster4450 with placement of links to these popular articles, inside posts about finance, which are SEO related... It is a work in progress, but....

Can you tell me how these posts do with attracting traffic?

The first article you linked has brought 46 page views in total, according to simpleanalytics. The second one has 40 page views.

Both of them are new so they haven't been able to rank and haven't brought any organic traffic so far.

Wow!Better then I thought, thanks!

Many are trying. Doing my best to add to the mix. I started to do a bit more on Twitter.

Hopefully this will all add to the traffic over time.

We can only keep doing and watching the progress.

You're doing an amazing job and I'm really satisfied with the results we've seen during these last few weeks.

It will most certainly increase traffic over time. It's bound to happen with all these things happening.

We are building. This is going to work because there are a core group of us who are dedicated to making it so.

We need a few of the backlinks that Khal was talking about.

Where did he talk about backlinks?

In one of the AMA. I think it was last weeks.

This one is very helpful to me. I didn't really understand the Andrei Jikh portfolio thing so far, but now I get it. I'm not sure if I can write anything related to that article, but let's see if I can find one of the traffic generating posts and use that one for a related article. I want to learn more about generating traffic so it's a good way to do so, as it hopefully also helps Leofinance ..

I'm glad you found it interesting and helpful. Every little bit of seo will help LeoFinance in the long haul. :)

Follow these 3 simple steps and you're off to a great start:

I'd love to read and support more authors who create quality supporting posts like this.

Remember that organic traffic is the most sustainable way to increase the price of the LEO token.

To any curators who have a sizable LEO stake, it's in your best interests to also create/support this sort of content.

I'd encourage anyone with stake, to try and reward authors who consider SEO in the content they create.

The only way to incentivise a lift in quality, is to stop rewarding content that provides no real value.

I'd love to read and support more authors who create quality supporting posts like this.

It would be extremely valuable content so literally everyone, especially large stakeholders should do the same and I agree with what you said about organic traffic and the price of LEO. You're 100% correct!

Organic traffic is definitely the key ingredient in our success-recipe. On all levels.

This is growth hacking. ✌️

this is only stupid...

Ah man! But why? This is the most basic thing everyone can do to drive more traffic to Leo Finance. Right now many people are not even following these simple steps before they hit that publish button.

Do you have a better way to attract more eyeballs to us?

If many people start to be hobby optimization we write machine content here.

Content needs always to be natural, special on blogging sites.

If leo looks to search engines like a nigerian content farm = penalty = no search engine traffic at all ( includes duckduckgo too, because they use similar filters).

Natural and quality signals from outside is the key, all other efforts are an waste of time.

The next step is to support Authors that can become Influencer become come to hive because of these characters. Thats the way to build.

At the end of the day, nobody cares about the platform, they come because of the users.

And if the content is like a cheap Info website, I don't see a reason people should think " wow what a nice place, I want to be here too".