New Reward Cards you should have in your deck

I have been observing new reward cards very closely for the past couple of days. The cards I found super cool I maxed them out for my deck. And truth be told they already helping me a lot and I love using them in my battles. I am going to share some cool new reward cards that I think that players should have in their deck if they want to be more competitive in the game. The very first card I maxed out. 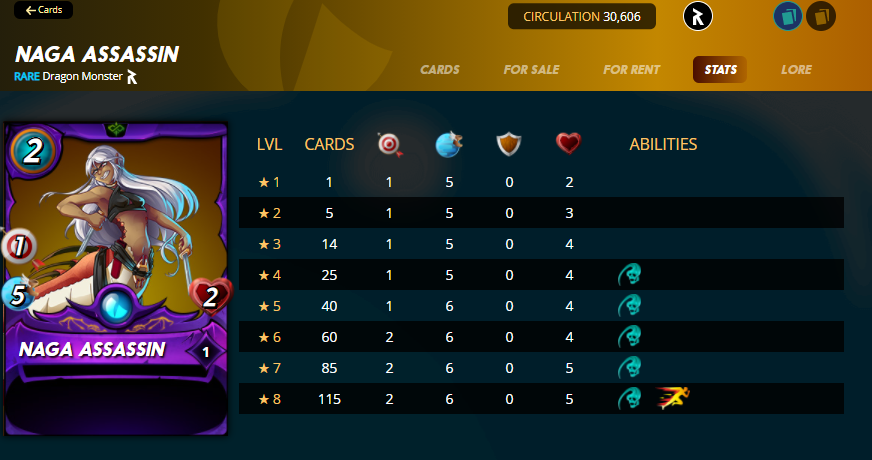 Naga Assasin is such a beast dragon rare card. If you don't have it you have nothing :P lolz just kidding. Naga Assasin is just 2 mana ranged attack monsters with 2 super cool abilities. Backfire, and Inspire. I already know what inspire ability does but I love this new ability backfire. Backfire is almost a game-changer ability. Since Naga Assasin is just 2 mana so this card would be extraordinary with dragon summoner. I purchased it for 1$/BCX but prices seem to fall a little so I guess it's an advantage for new buyers.

Venari Seedsmith is rare earth ranged monster with scavenger ability. She is the first ranged attack monster with such ability and I found it really cool this is why I maxed her out. Well, when it comes to earth splinter. Any new monster that belongs to earth I just go crazy after that monster. It also has poison ability that makes it even cooler.

Djinn renova is a fantastic card. She will be super cool in reverse speed. She does have two amazing abilities strengthen and Triage. Any monster that has triage ability I prefer to get that monster asap. Thanks to dec prices it made card purchasing a little more convenient.

@xawi! I sent you a slice of $PIZZA on behalf of @libertycrypto27.

Yes. you should because they are so good

Congratulations @xawi! You have completed the following achievement on the Hive blockchain and have been rewarded with new badge(s) :