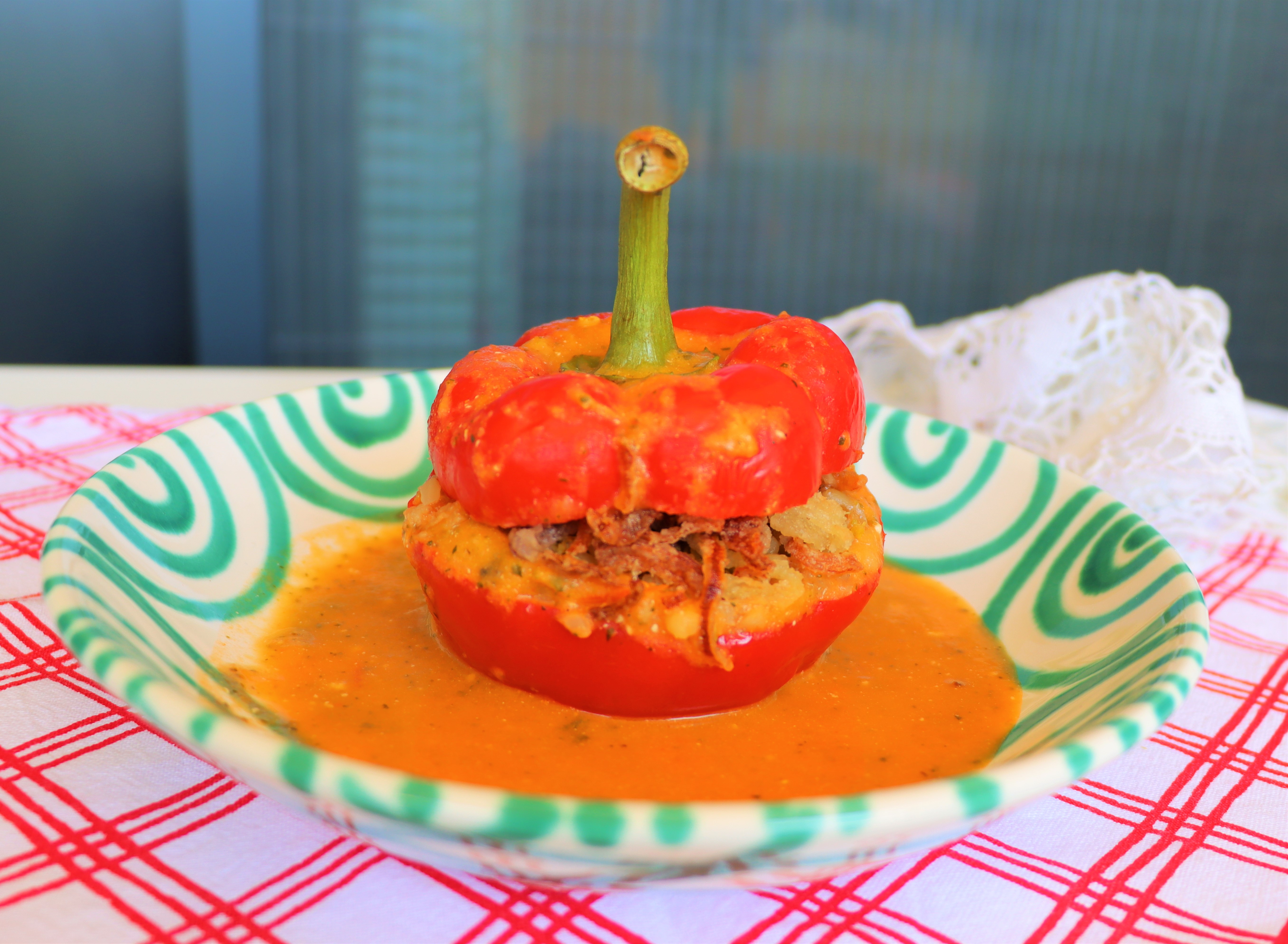 If you have seen my post before this, please ignore it! I´ve had a computer problem, it broke down a couple of hours this afternoon and the monitor went black. This post was supposed to be a draft, I do not know why it got posted. Good thing I saved all the photos in a notepad. My guess is that this was due to the graphics of my computer. At any rate, I am continuing this post. Sorry for the inconvenience!

I am sharing a dish I made a couple of days ago and this is about stuffed red bell peppers. The fillings were mainly made of bulgur, cauliflower, broccoli ... I made extra crispy fried onions to garnish this on top of the pepper. Let's start with the recipe.... 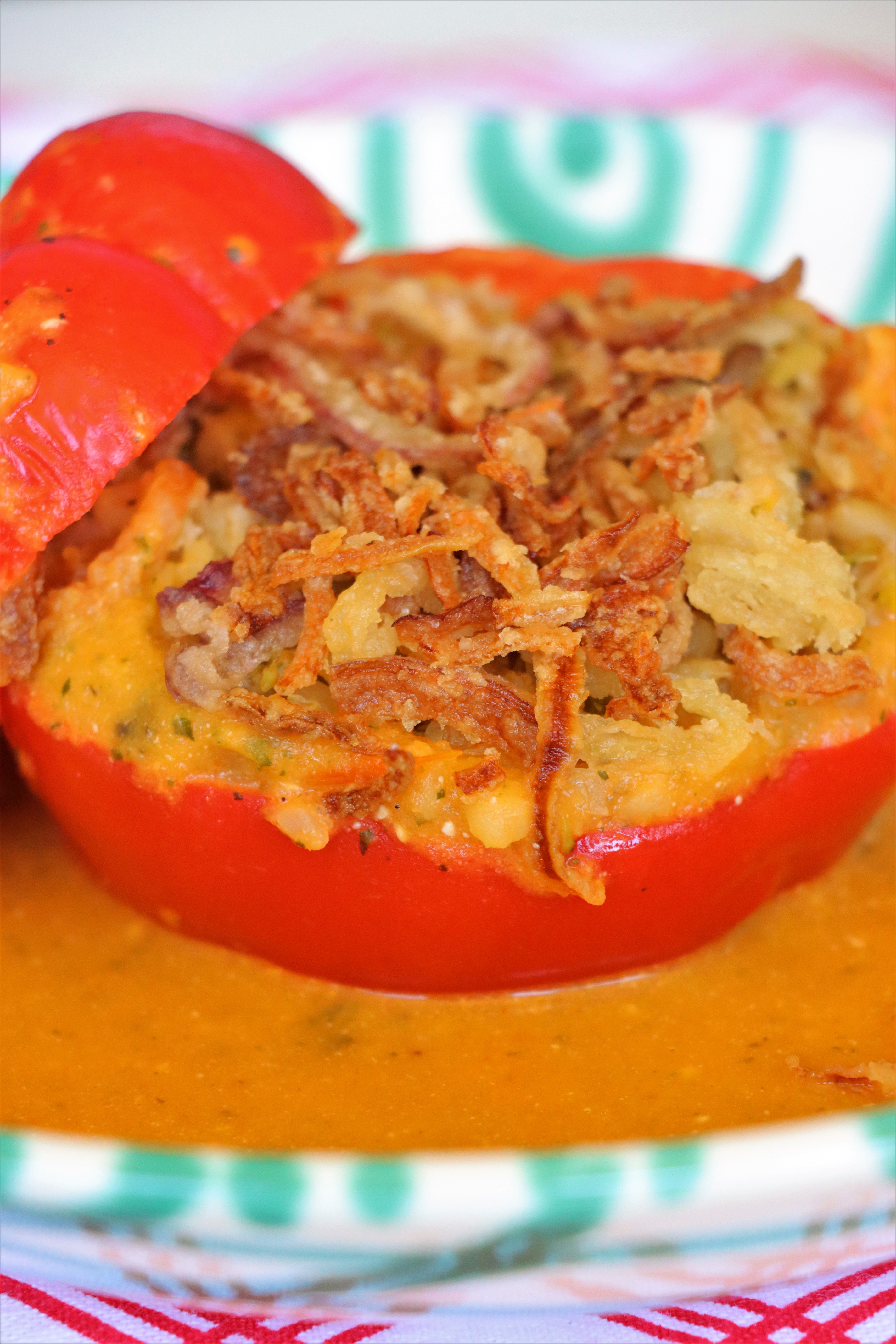 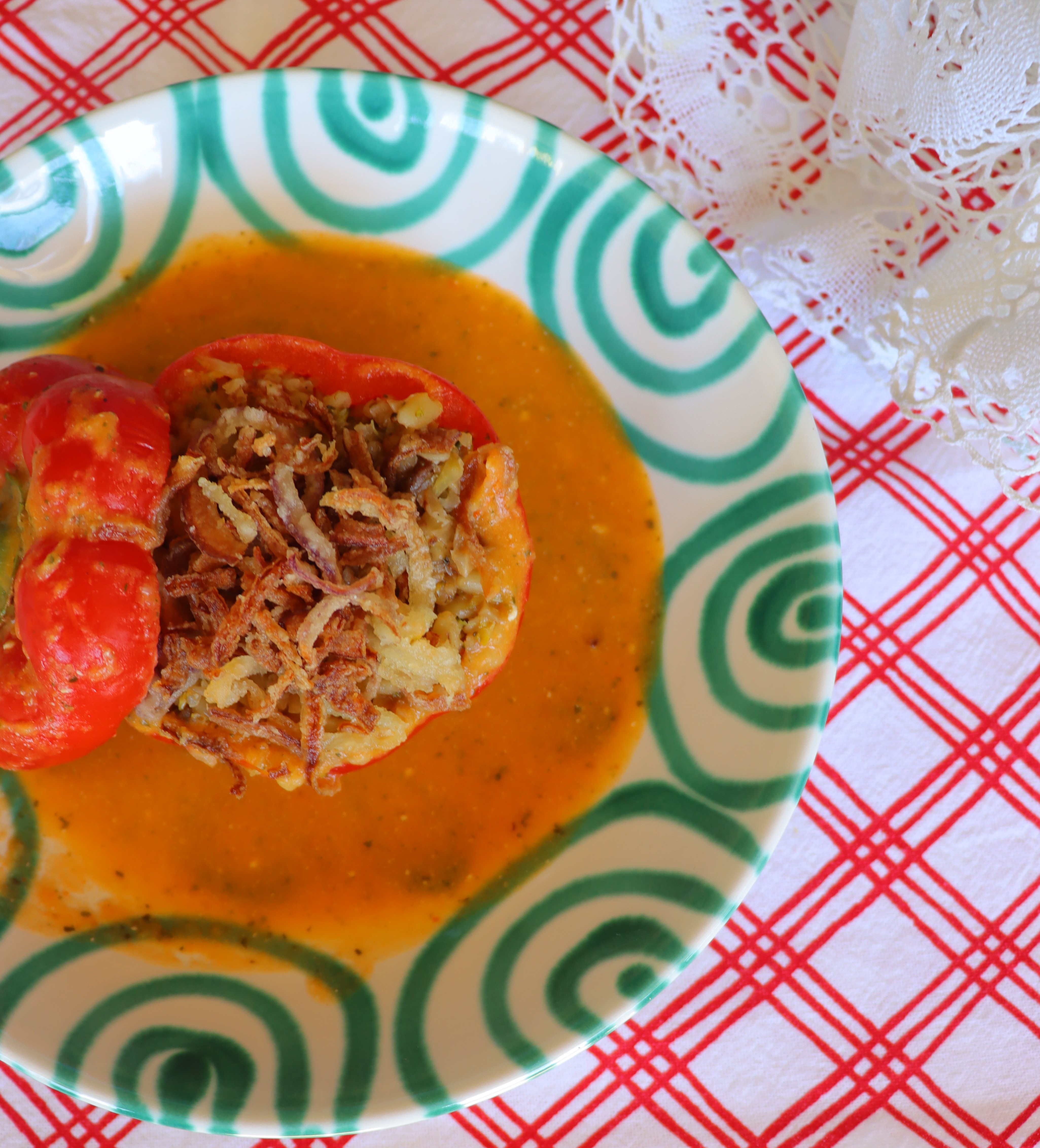 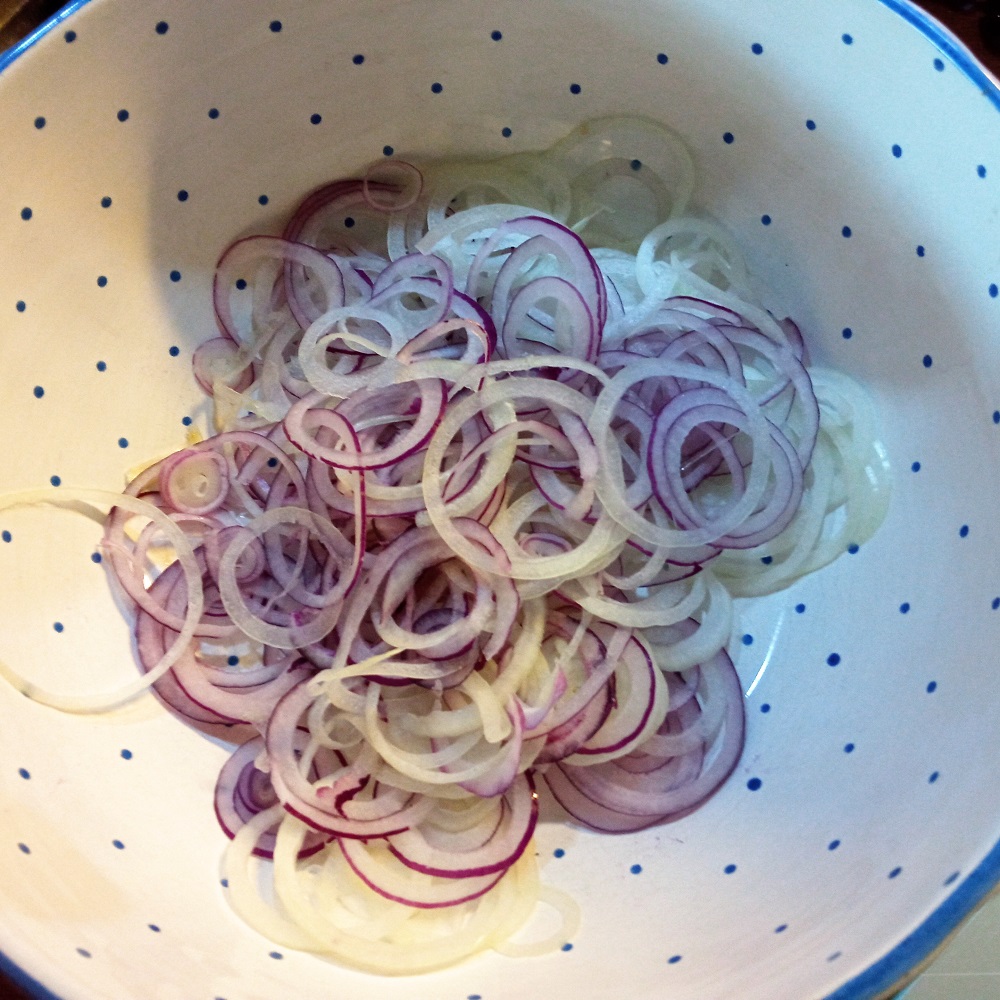 2... In a hot casserole with enough cooking oil, deep-fry the onions, keep on mixing until the onion rings get the brown color and become crispy. This will take about 4 minutes. Remove the onions and transfer these to a plate lined with paper towels. Set aside for later use. 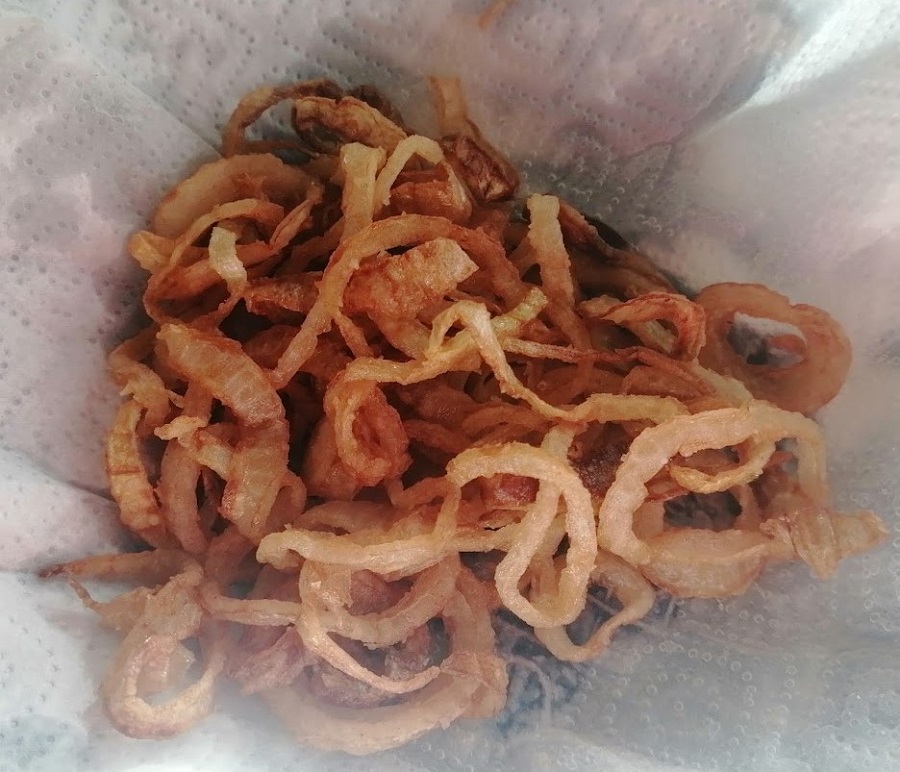 This is a very simple thing to make… in a hot pan with 2 tablespoon cooking oil, fry 5 cloves of crushed garlic until the pieces are golden brown in color. 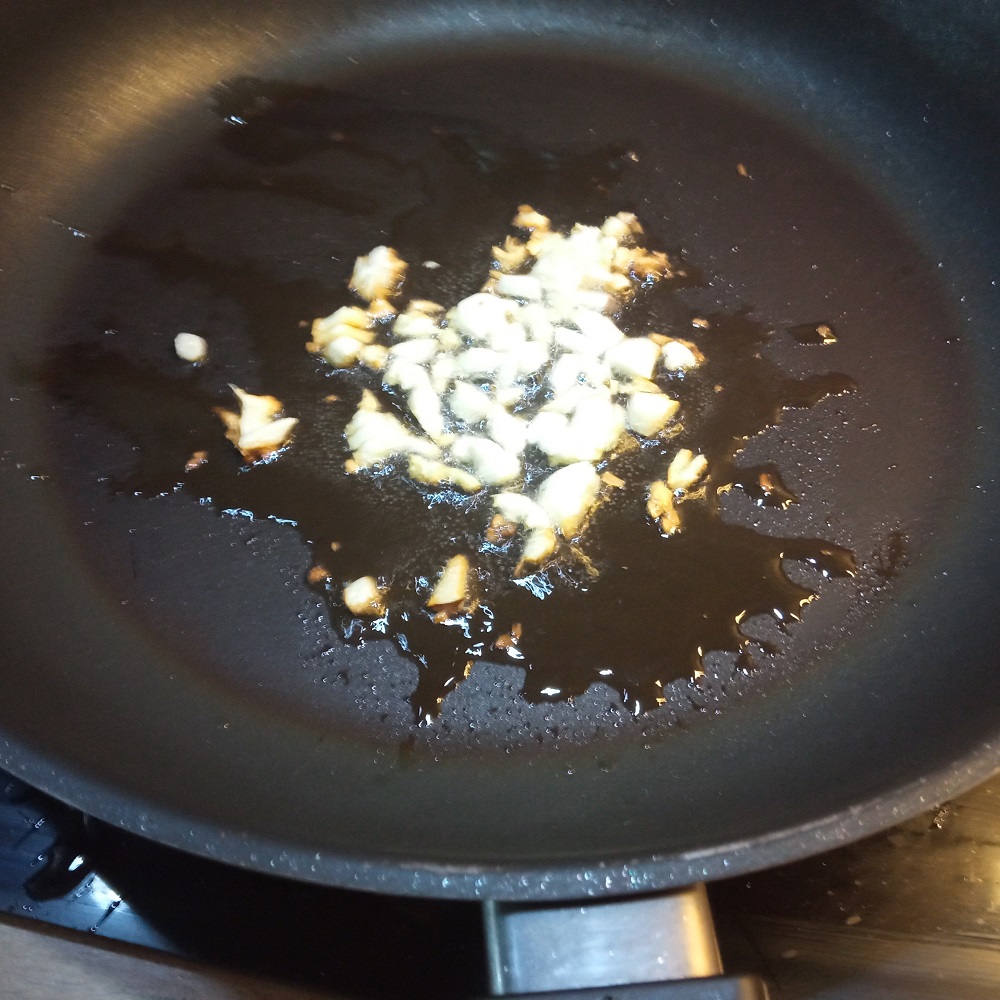 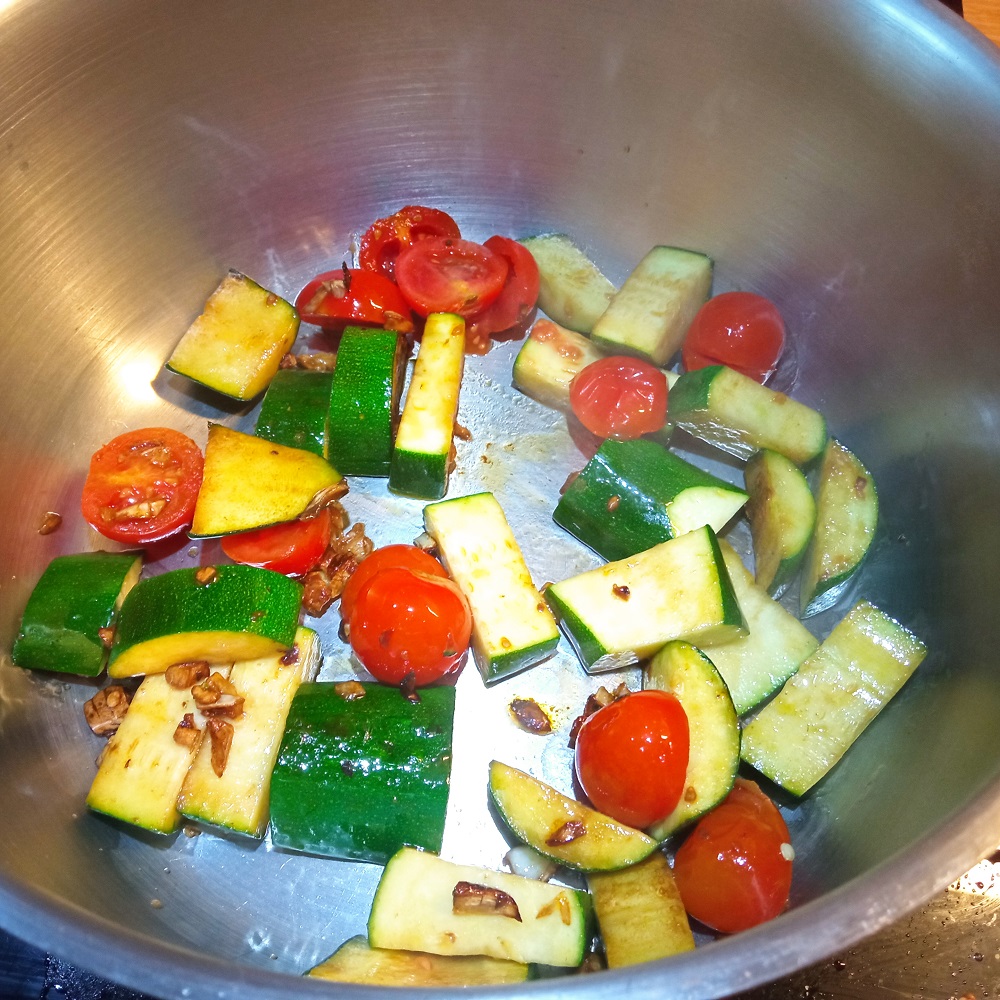 Toss sliced zucchini and a handful of halved cherry tomatoes ( or any other tomato variety). Sprinkle 2 teaspoons of soy sauce and fry the vegetables until all are golden brown in color . 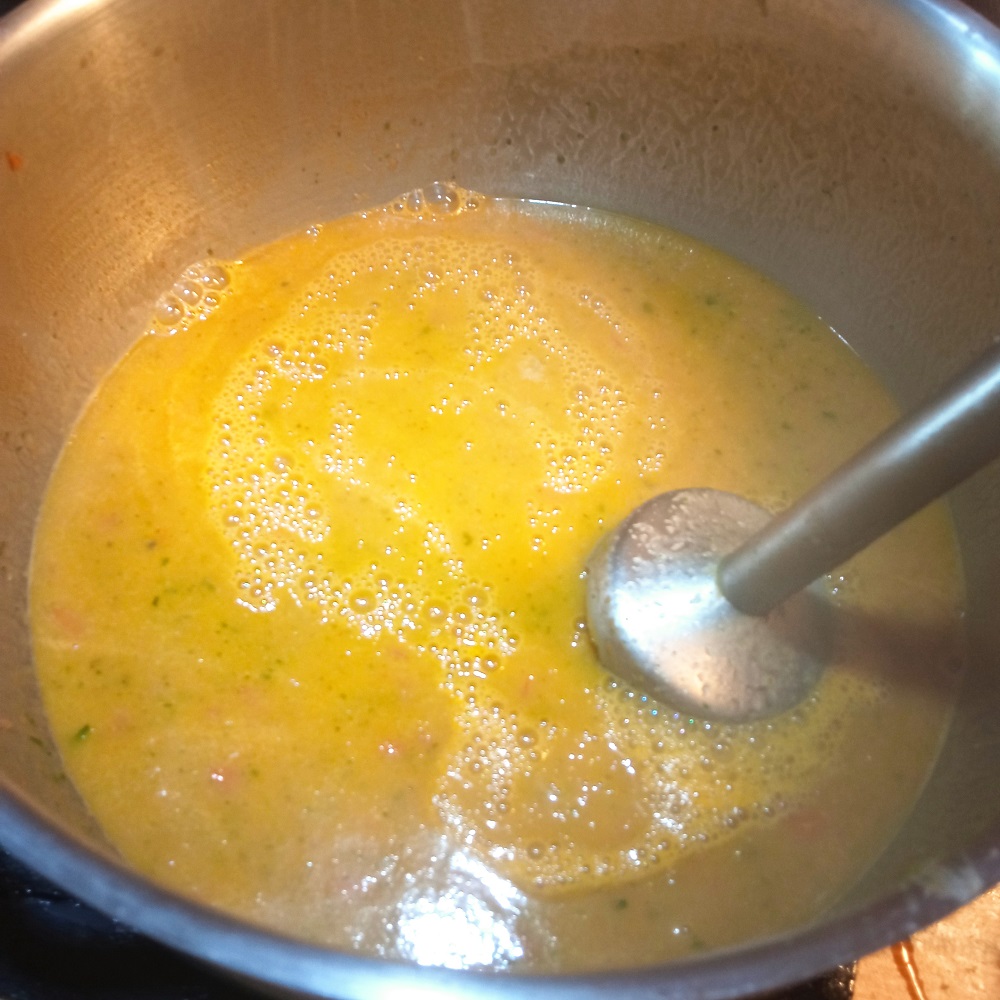 Add 1 vegetable cube diluted in 1/2 liter water... Cook until it boils then turn the flame off. With a stab mixer, liquify the ingredients until it is fine in consistency. Adjust taste with salt and pepper according to your preference. Set aside for later use.

I always buy bulgur at my favorite Turkish shop, my choice is the coarse type as pictured below. It is similar to rice. Of course you can substitute this with couscous or if both are not available, use rice.

The bulgur is easy to cook. Simply boil in a casserole with enough water, add a bit of salt, cook until they become soft ( about 20 minutes). Take out from the fire, drain the water and leave it for later use. 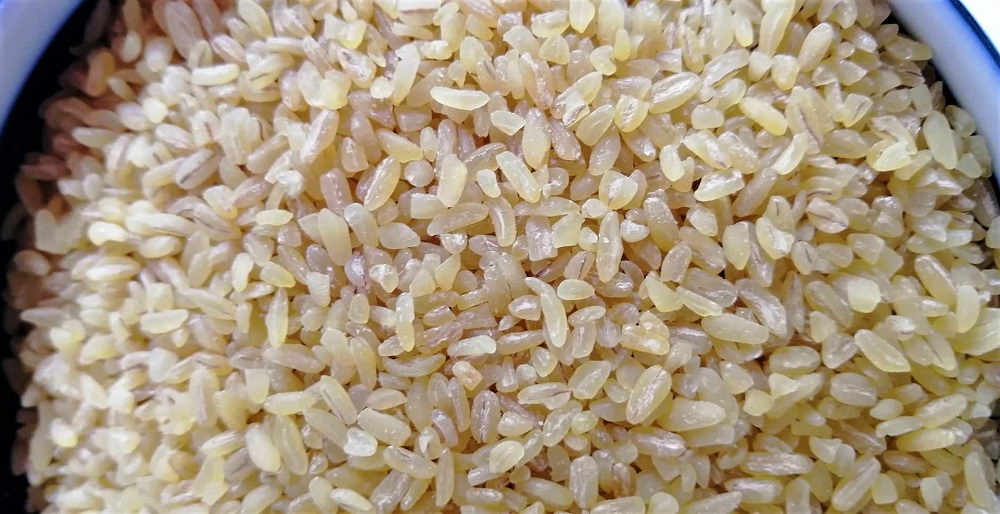 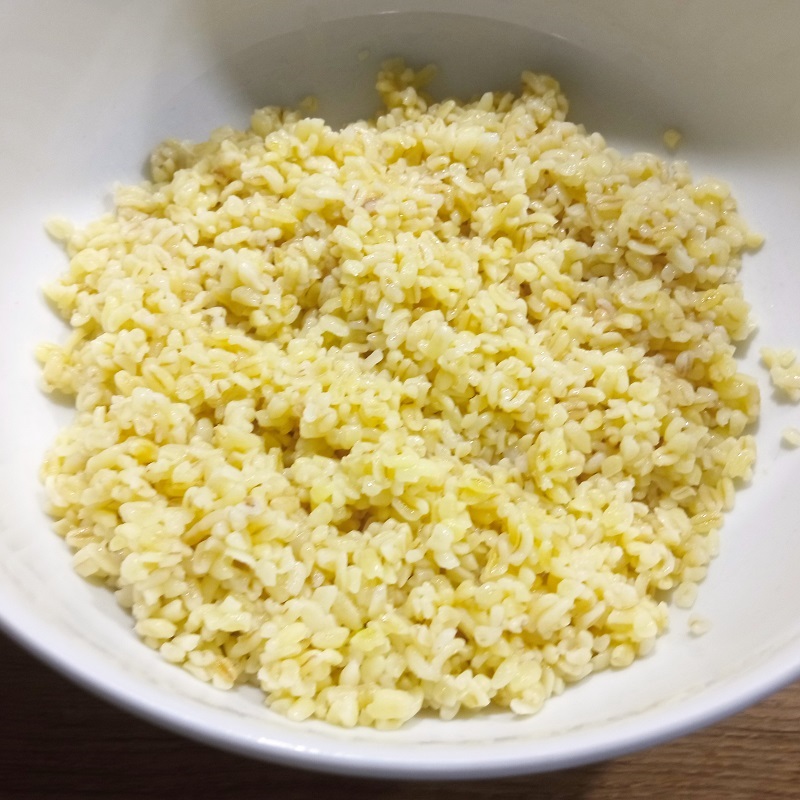 I cut these two ingredients into flowerettes , steamed until semi soft ( about 5-6minutes) then I used a mixer to crush them coarsely that would resemble the size of the cooked bulgur. 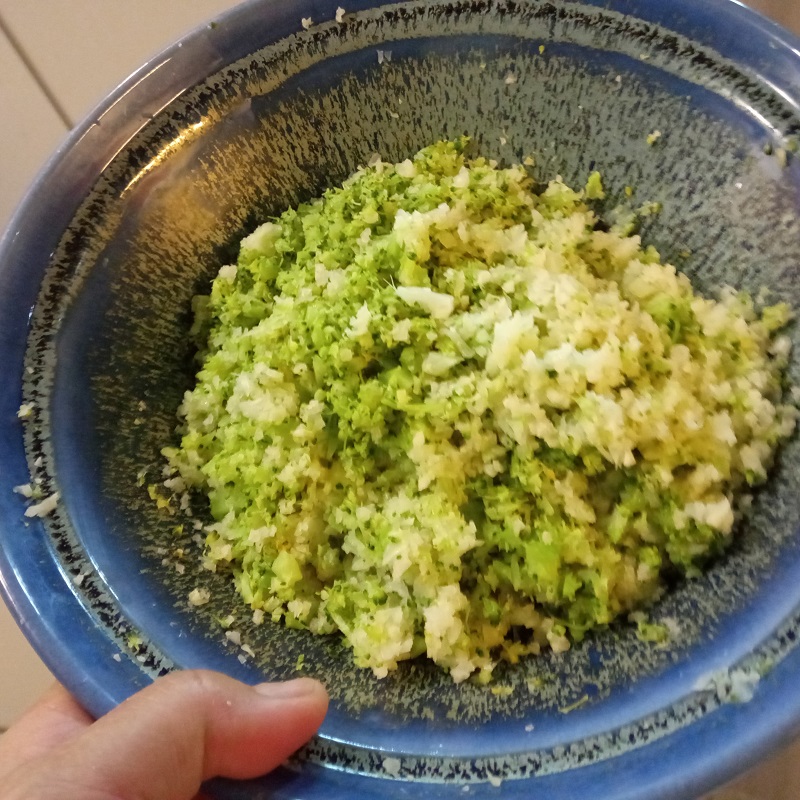 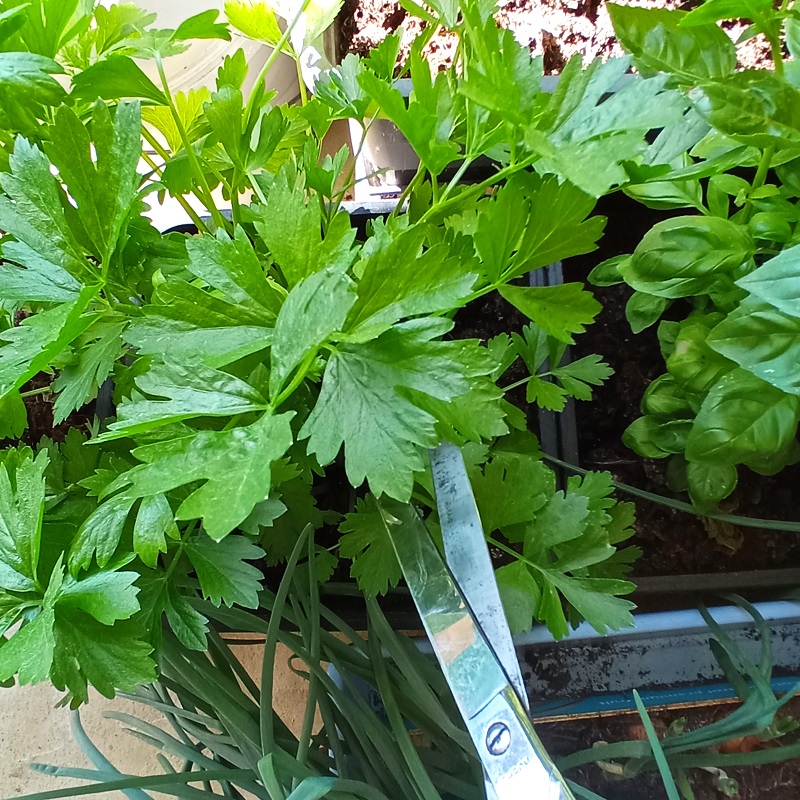 I harvested a handful of leaves of the celery, minced them to add to the fillings. 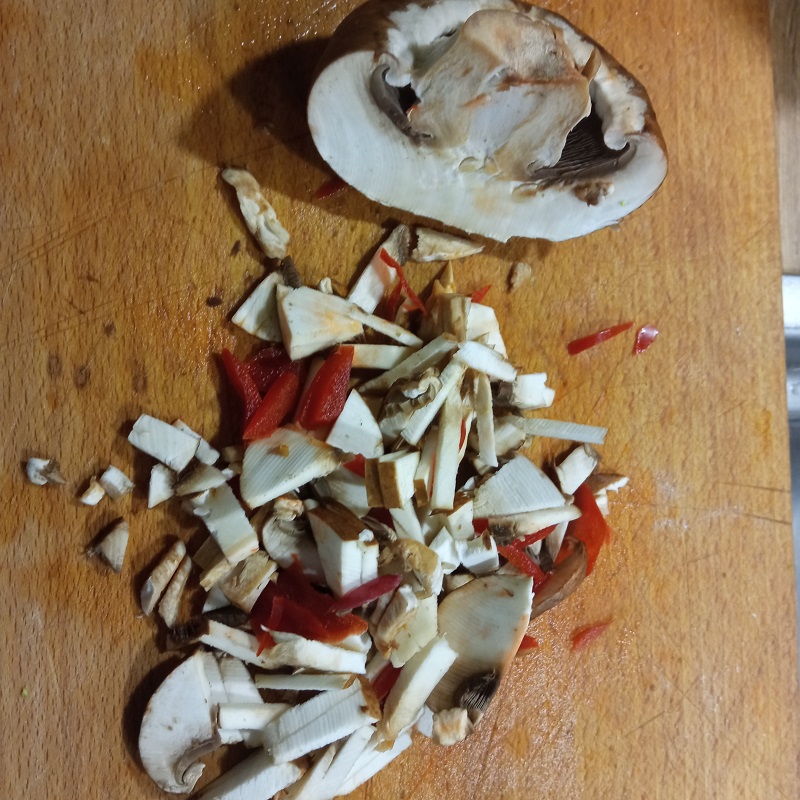 In a hot pan with a bit of cooking oil, I fried the garlic, the onion, parsley and 2 minced button mushrooms until soft and brown. The red ones were an excess of the bell paprika I cut from its bottom to make them stand-up when stuffed with the fillings. Then, I added the bulgur, crushed cauliflower and broccoli , added salt and pepper.

Then stuffing was next and the cut bell peppers were filled with the mixture. I have four ways of cooking the stuffed bell peppers to make them soft:

a... cooking together with the sauce
b... cooking thru microwave oven
c... thru steaming
d... arrange in a platter, grill in the oven at 200°C

I chose to steam the stuffed pepper for about 15 minutes, the fillings were already cooked...then I heated the zucchini sauce and added the peppers, letting them stand warm before serving. 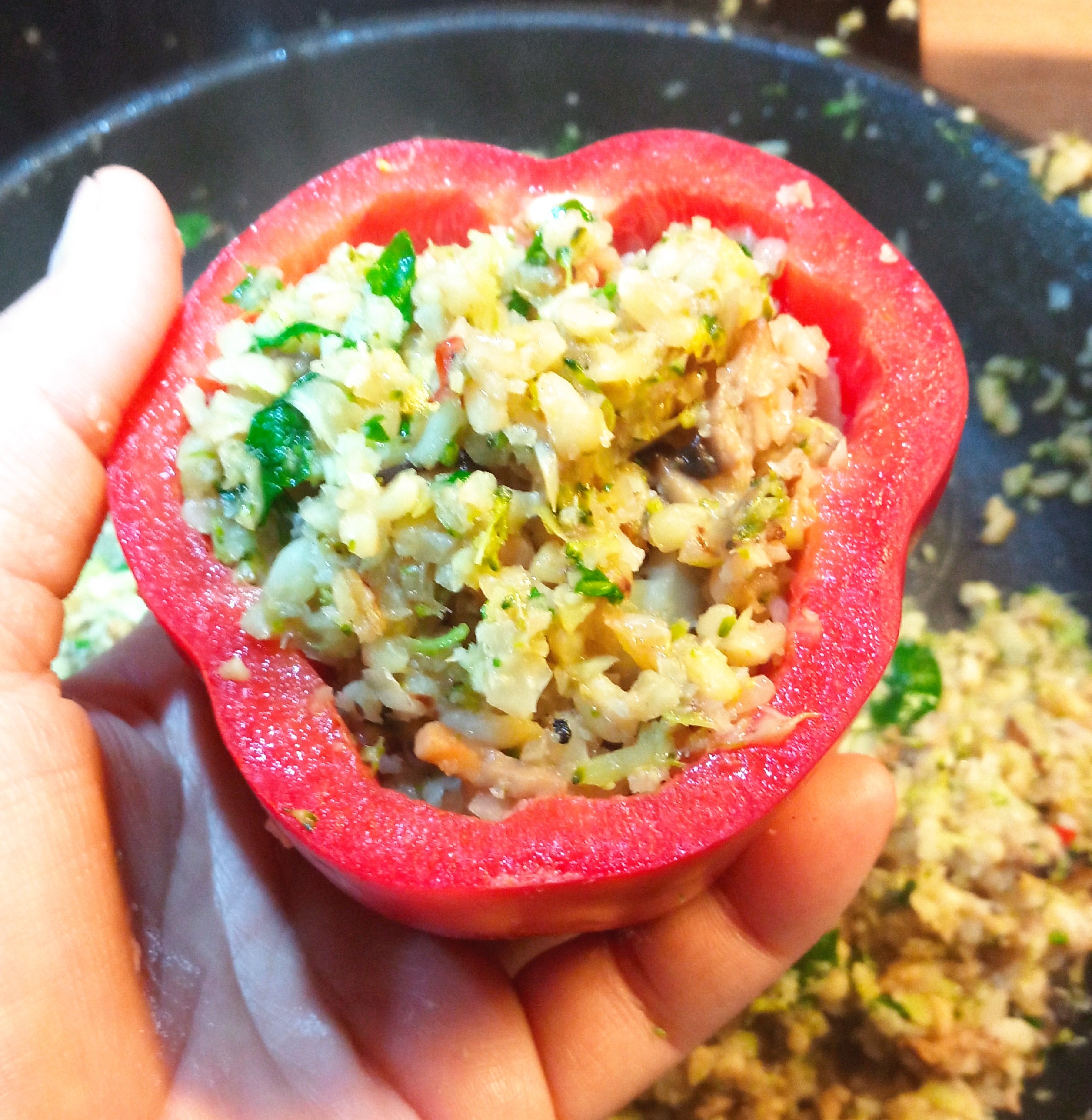 Before serving, I garnished the top of the pepper with the crispy fried onions. I added the sauce and served it hot. This can be eaten as main dish. 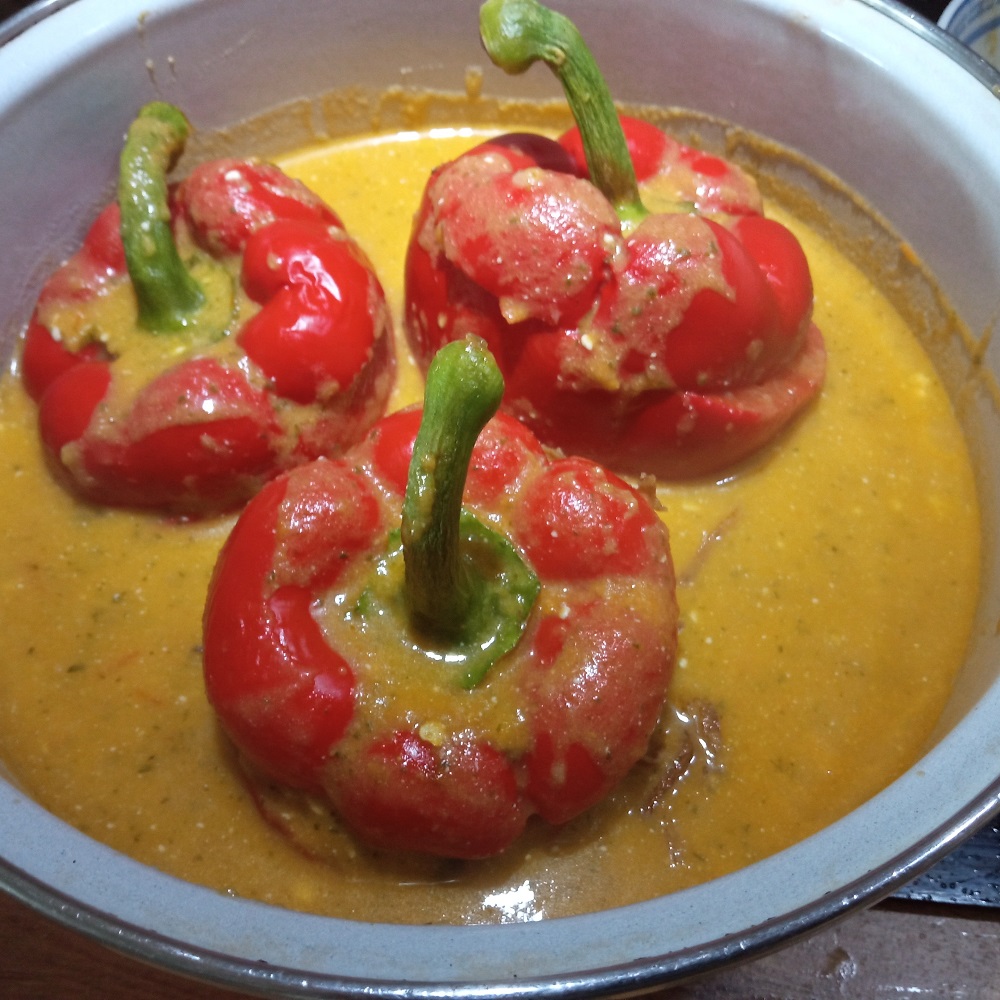 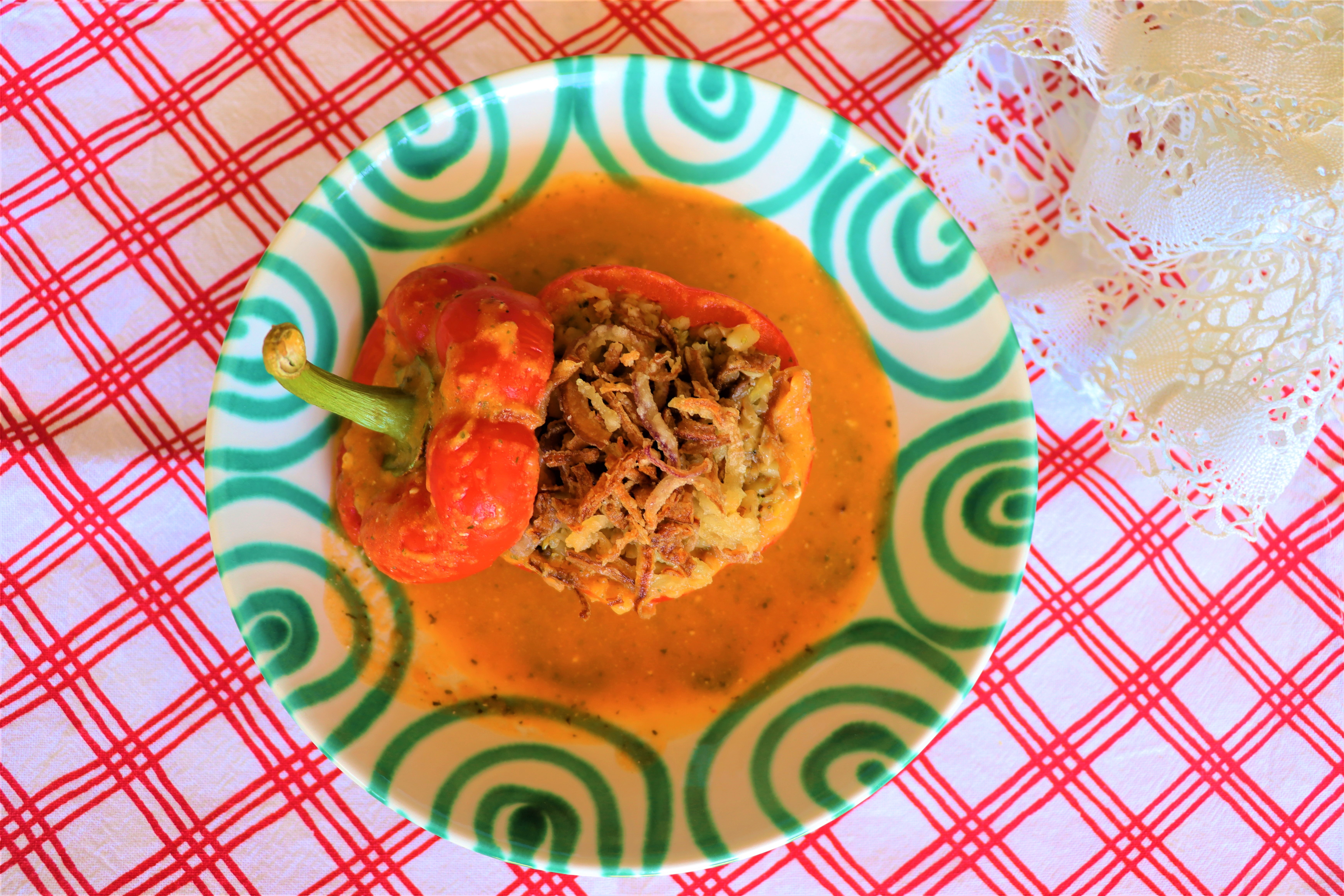 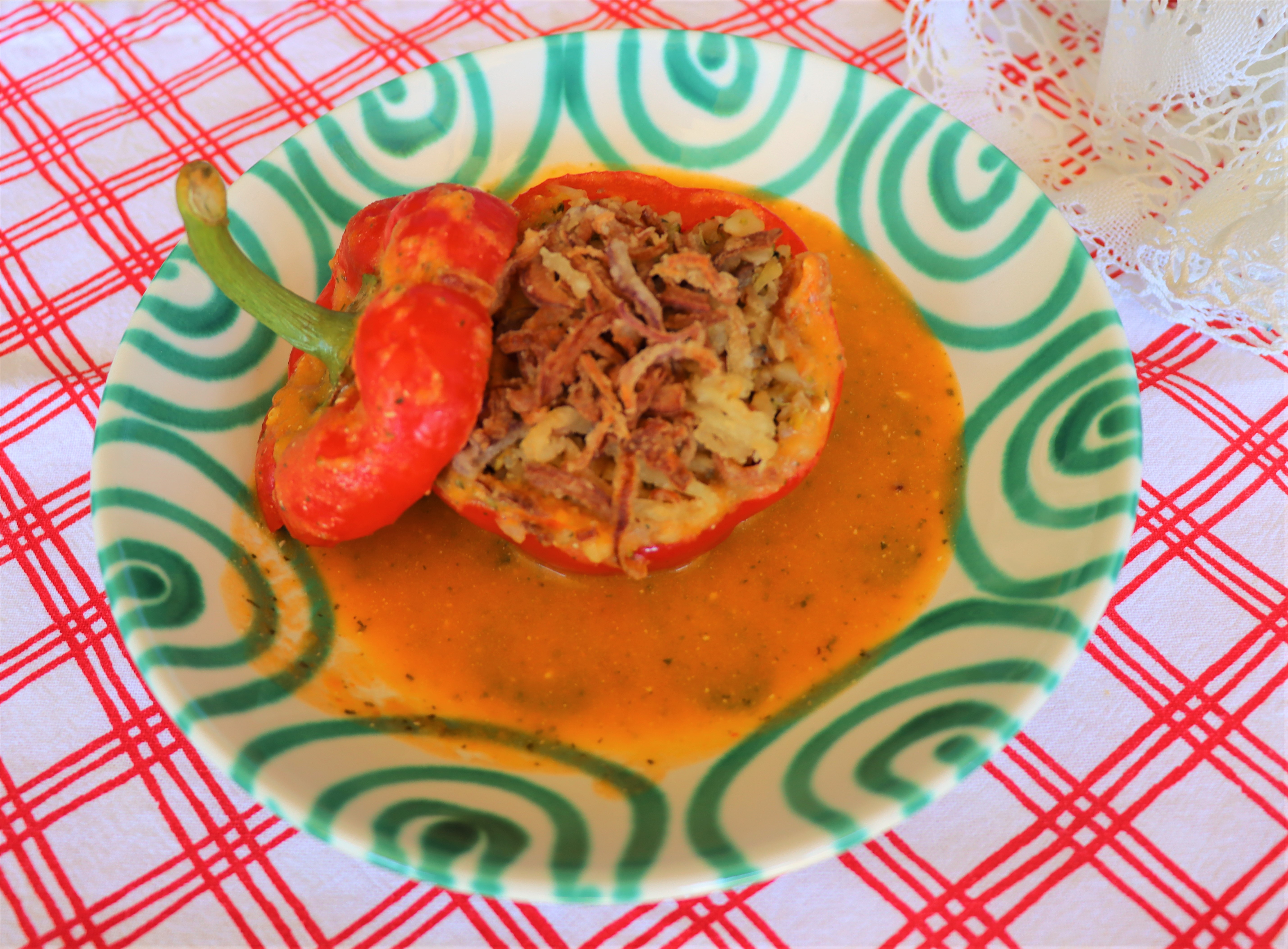 I hope you will try this vegan dish in one of your meatless days. It's yummy, my husband said we should have this more often.

All images in this post are owned by @mers

I will try this, may help with the weight loss I have gained from vacation😊

Yup, good for the diet.... But you haven´t really gained weight when I saw you pics in the Temple of Leah post. Have this cooked by your sis and simply savour the flavor...hehehe. Kanpai!

Hahaha...will try to do it I have plenty of time!

This is a lovely recipe. I love that you used bulgur. I usually use rice but I like the idea of bulger. It makes it kind middle east.

I'm glad your computer is back. I had problems a couple weeks ago. It's pretty annoying haha.

Thanks a lot my friend. Bulgur is better than rice because it has lesser calories. In the Philippines, we eat rice for breakfast mostly with dried fish. At lunch, rice is a must,lol. Then in the evening, we have rice again. The 3 meals evolve around rice. hahaha.

Yep, it´s really annoying when computer is becoming weird. The screen simply turns black after 10 minutes of not being worked at, then I have to start all over again. I bought my laptop just when I started blogging almost 5 years ago for Steemit, then Hive came. Maybe, the graphic card should be changed. Repairs are so costly here in Europe, so I might as well buy a new one before I spend for the repair. Before this , I had a Samsung Laptop which I used blogging for Google since 2012, then it gave up.

Thank you so much for the visit, glad you have included this post in your curation.

Many thanks for the support, appreciate it!

Thank you for sharing my post on Twitter... sending love to you and the rest of the team!

@foodiesunite 65
about 1 month ago
Wait, did you say FOOD? Foodie is in town on #HIVE!
Yum! Your post would look great with the #foodie tag. You have been curated @sirenahippie on behalf of @FoodiesUnite. We are a tribe for the #Foodie community with a unique approach to all things food and we are here on #HIVE.

Join the foodie fun! We've given you a FOODIE boost. Come check it out at @foodiesunite for the latest community updates. Spread your gastronomic delights on PEAKD.com and claim your tokens.

Thanks a ton for curating, appreciate it!

Wow! This dish is complete. And, your peppers are really big just perfect for stuffing.

The red peppers are in season now...I was wondering why the green variety are expensive nowadays. The supermarkets are loaded with the red ones...Thanks Jude fpr dropping by.

@plantpoweronhive 64
about 1 month ago (Edited)

Hi @mers! I'm sorry to hear about your computer, hopefully you were able to resolve the problem. Now, let's talk about this recipe, which is great, since the combination of flavors is very appropriate, I can imagine the delicious aroma of bell peper as well as all that mixture of flavors. Very good post, it is excellently well explained and with very good photos. Thanks for posting on Plant Power Vegan. Greetings, good day.

Hello and good evening! Time check in Vienna as I am writing this: [20:47 ] Thank you for your lovely words. Yep, I love to experiment with my ingredients and the hubby liked the recipe. As his critcis were good, I may cook this again, lol. Thanks for the POSH post on Twitter, appreciate the exposure. Sending lovely greetings from Vienna! Cheers!

I can smell the aroma haha, one of my fave way back in arabia, it tastes so good especially with a pomegranate sauce.
Thanks for sharing♥️

You can cook this again with your pomegranate sauce. Maybe I will try it because the fruits are in season here now. Thanks for dropping-by!

Oh I grew up eating stuffed bell peppers but I haven't had one in years! Now you make me want one. :D

Lol, go make some dear... If we are only neighbors, I could send you some.. hehehe.