Tales of the Urban Explorer: The Sandon Motor & Engineering Company

I felt cheated; how can such a shithole like this be sealed up?

The day had been most unlucrative. Everywhere we looked had been sealed, renovated, or had annoying Karen's hanging around the entrance points, placed and purposely poised to ruin things. 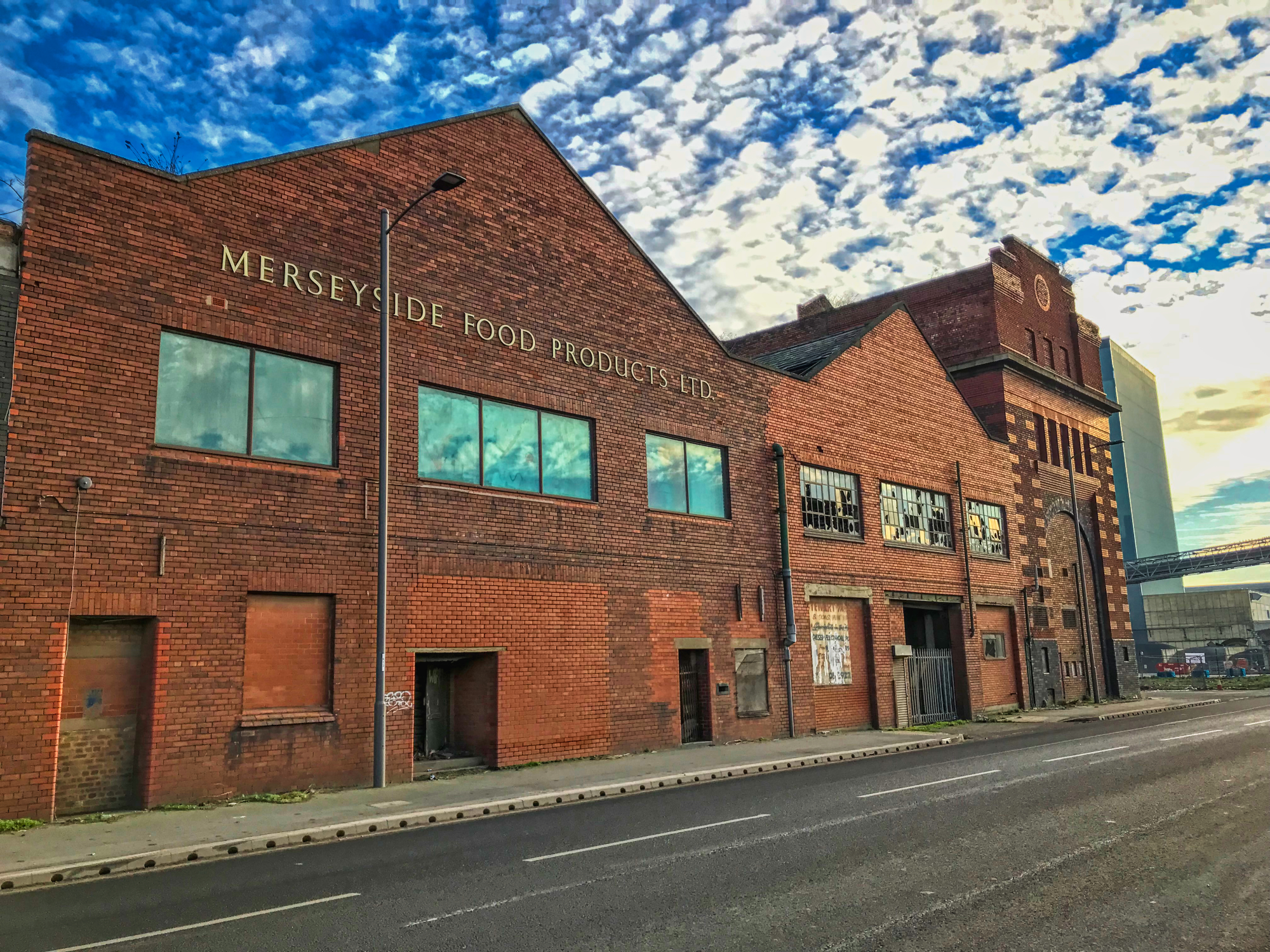 "That old Ironworks is shit, but it's an easy walk-in", @anidiotexplores was telling me.

I was quite up for some industrial vintage shots, though it could well be the remnants of empty vintage receptacles shot by the local junkies on the previous day. 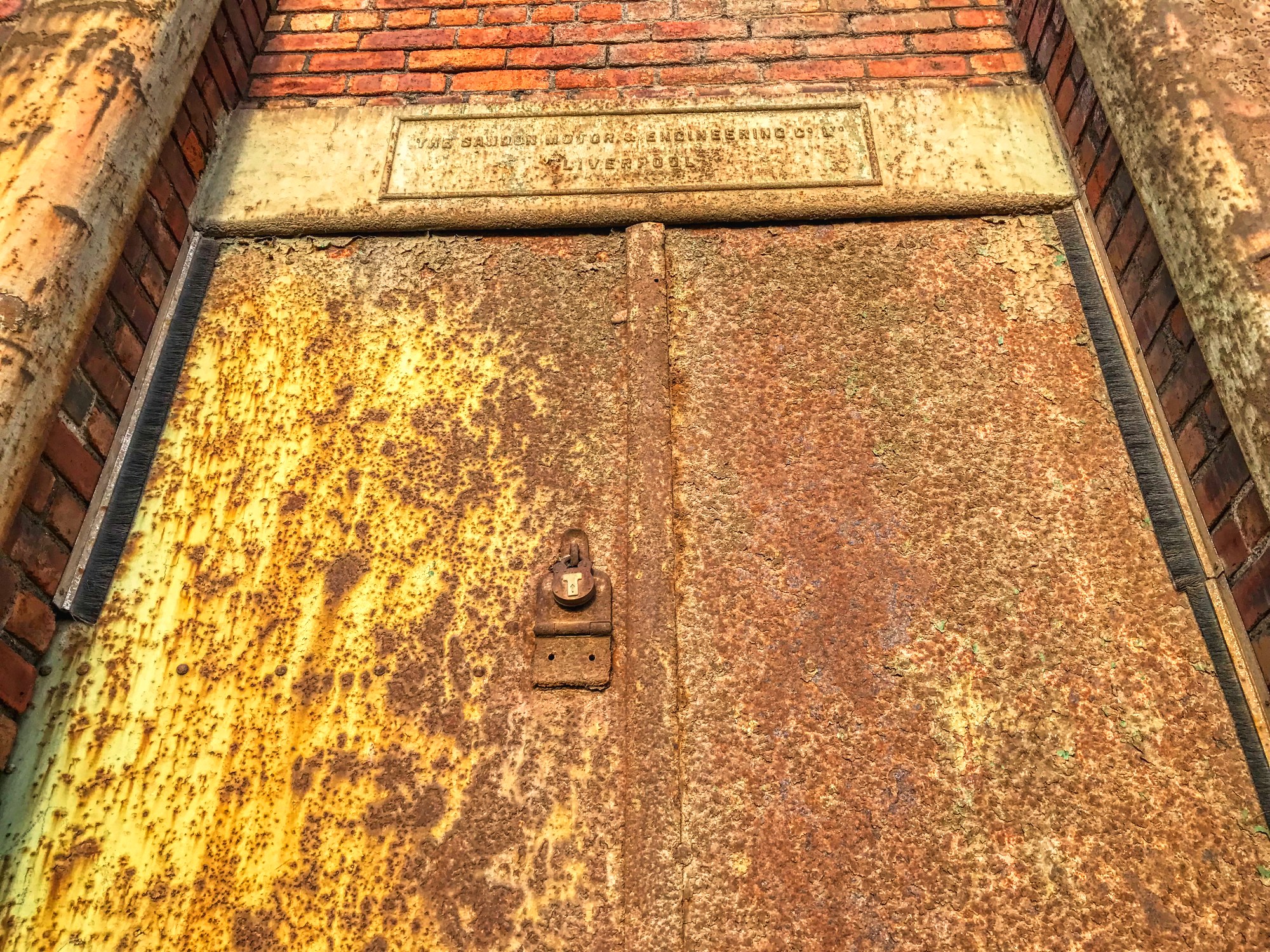 The Sandon Motor and Engineering Co. Ltd hails from around 1919, but this still doesn't tell me the age of the building they used to inhabit.

This abandoned warehouse, was once the building of Merseyside Food Products and also housed a margarine works, a transport depot and an auto garage in the early 90s. The ironwork on the loading bays says “The Sandon Motor & Engineering Co LTD” and this company ran a large fleet of steam wagons for The Liverpool Warehousing Company.
Source 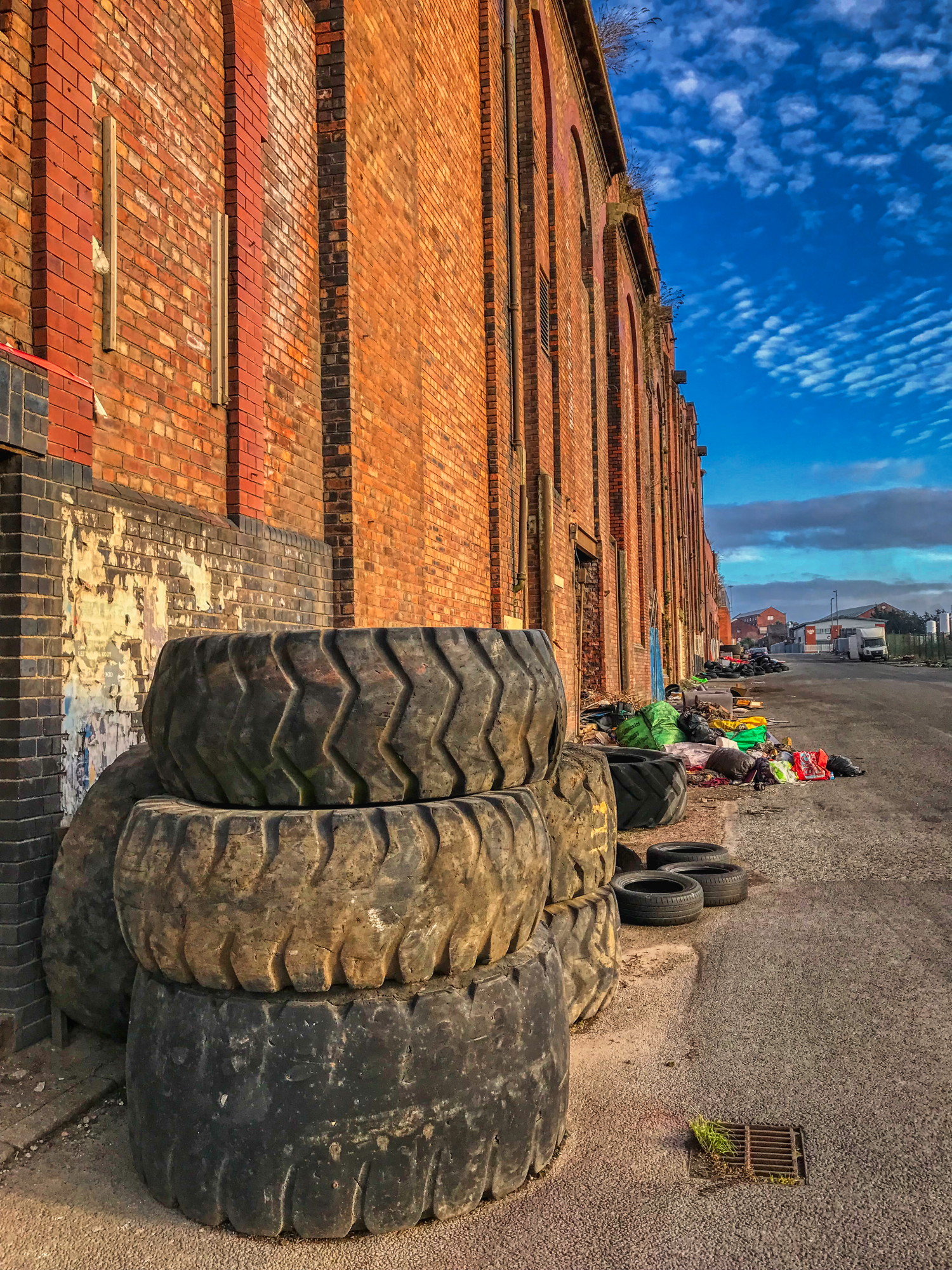 This area of Liverpool was strange, quiet, and empty. I felt a hit could be completed quite easily here, the body dumped inside a stack of tyres and nobody would notice. 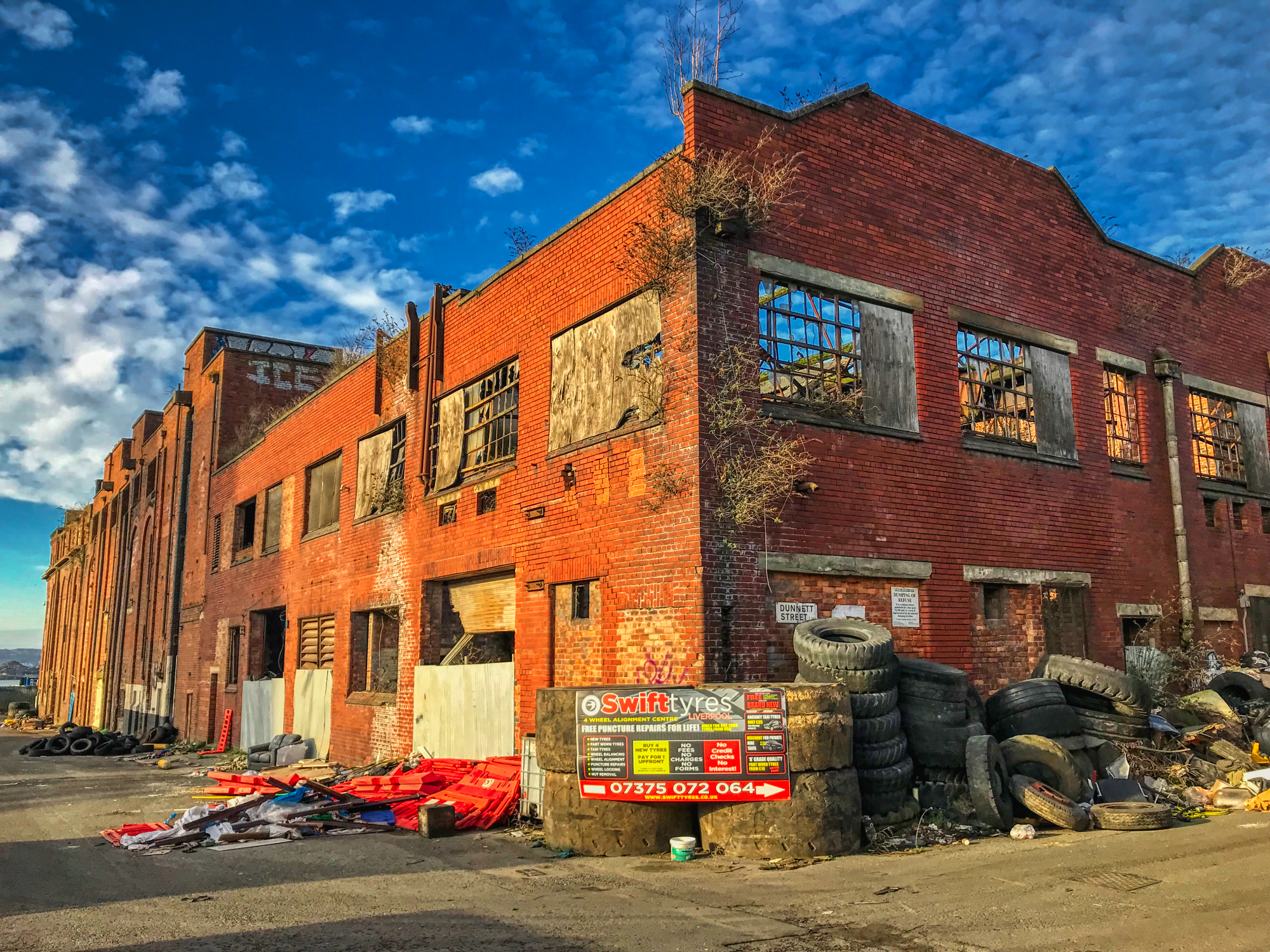 Parking up on an extra-wide road, we figured this one was going to be easy access. @anidiotexplores had been previously with little in the way of problems. Yet the old access points had been sealed which brought us to this makeshift ladder. It wasn't a big issue climbing up but I am very wary of these 'ladders' that have a habit of collapsing and trapping your feet.

…'yes, I speak from painful experience'… 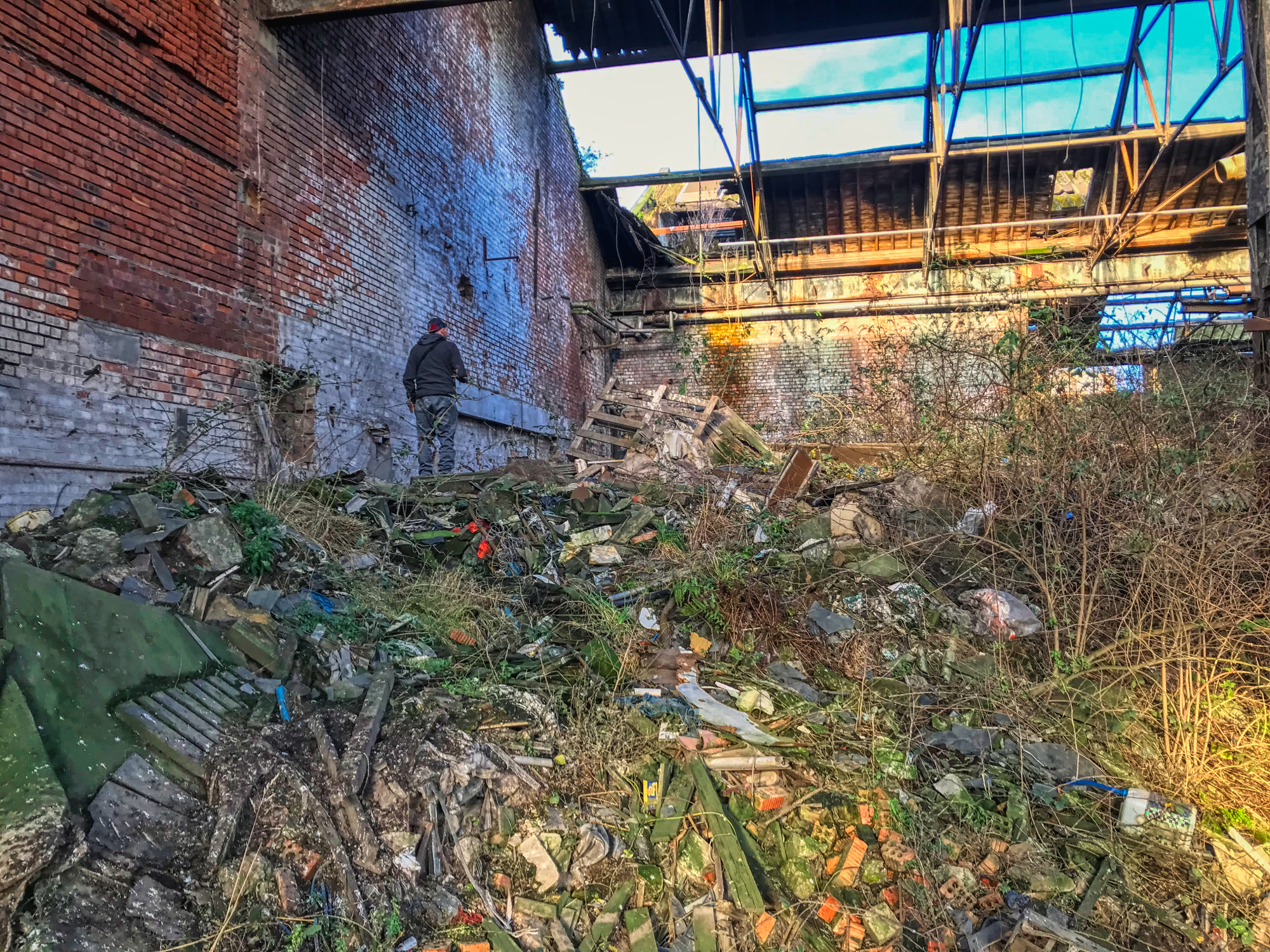 Inside was a mess. A hill of shit and my comrade was already at the top. Was it going to be worth the bother? 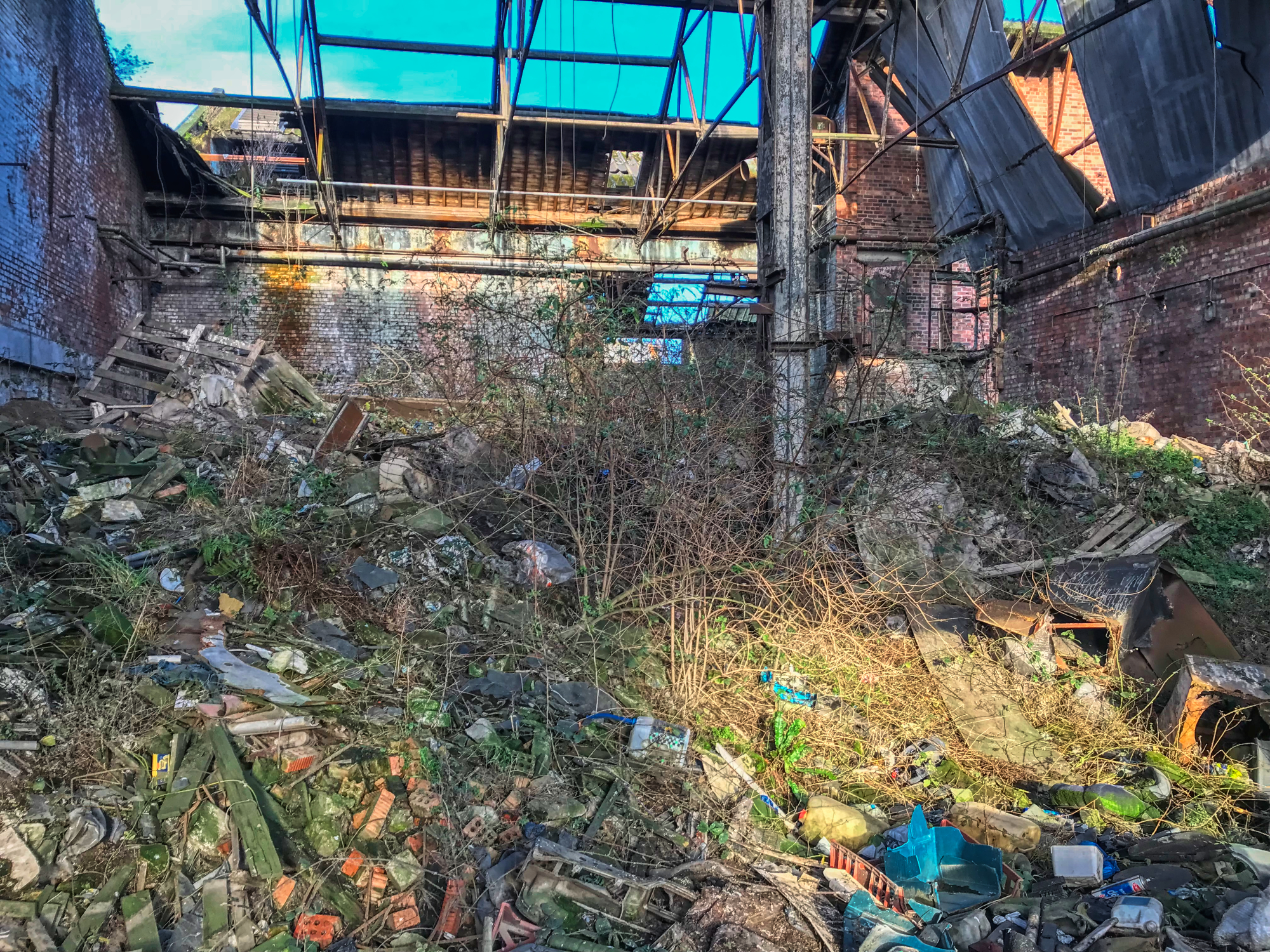 Within seconds he was gone, likely labouring to see what was on the other side.

Close to the peak of this mound, I was given a glimpse of the real inside. It was fifteen feet drop through that hole without ever having a chance to escape. 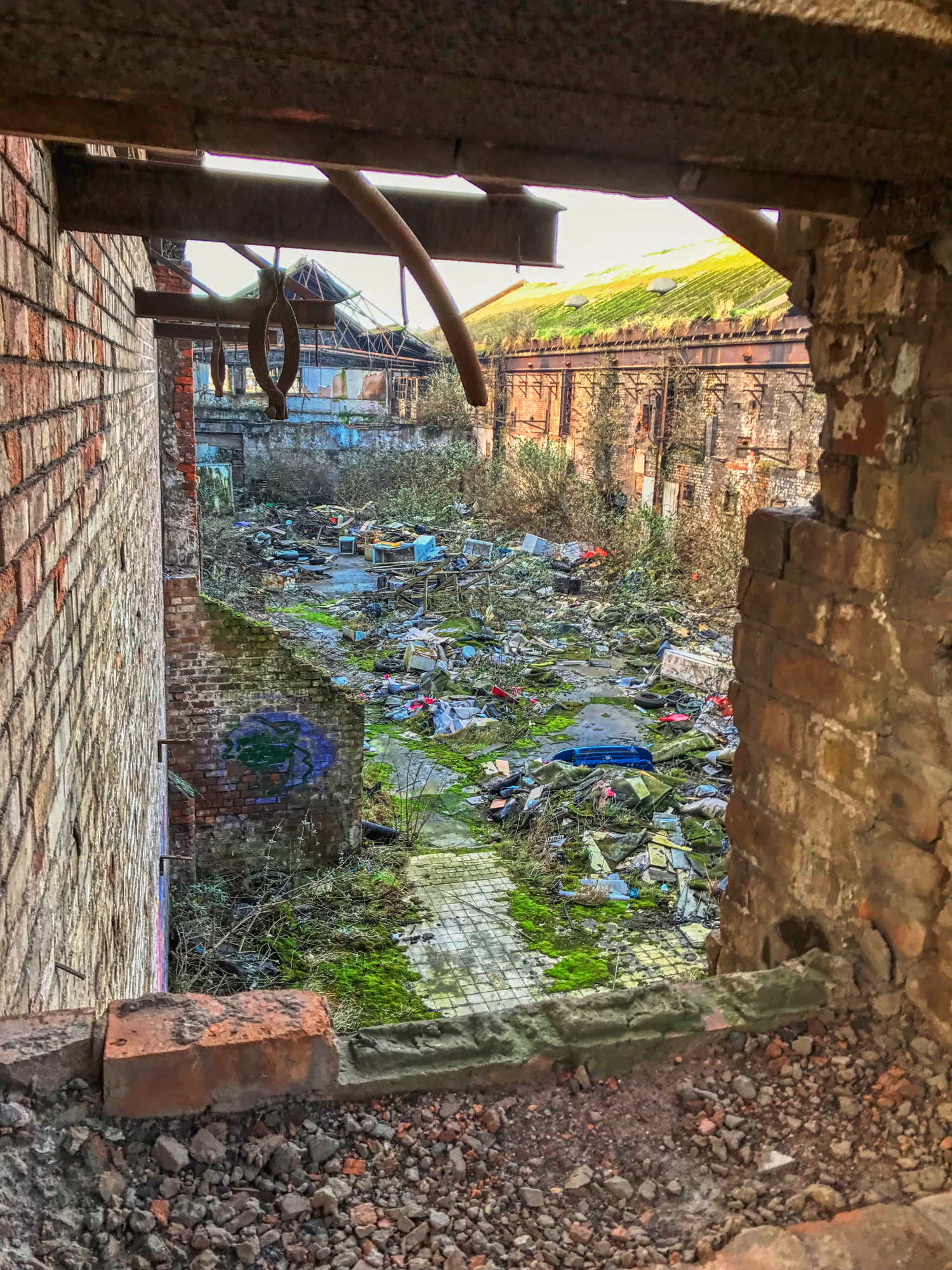 I felt suicidal and drooled over the goodies down below enticingly close and yet tantalisingly out of reach. Brushing aside my desire for a quick death I struggled down the other side of the shit mountain spotting @anidiotexplores disappearing over yet another peak. 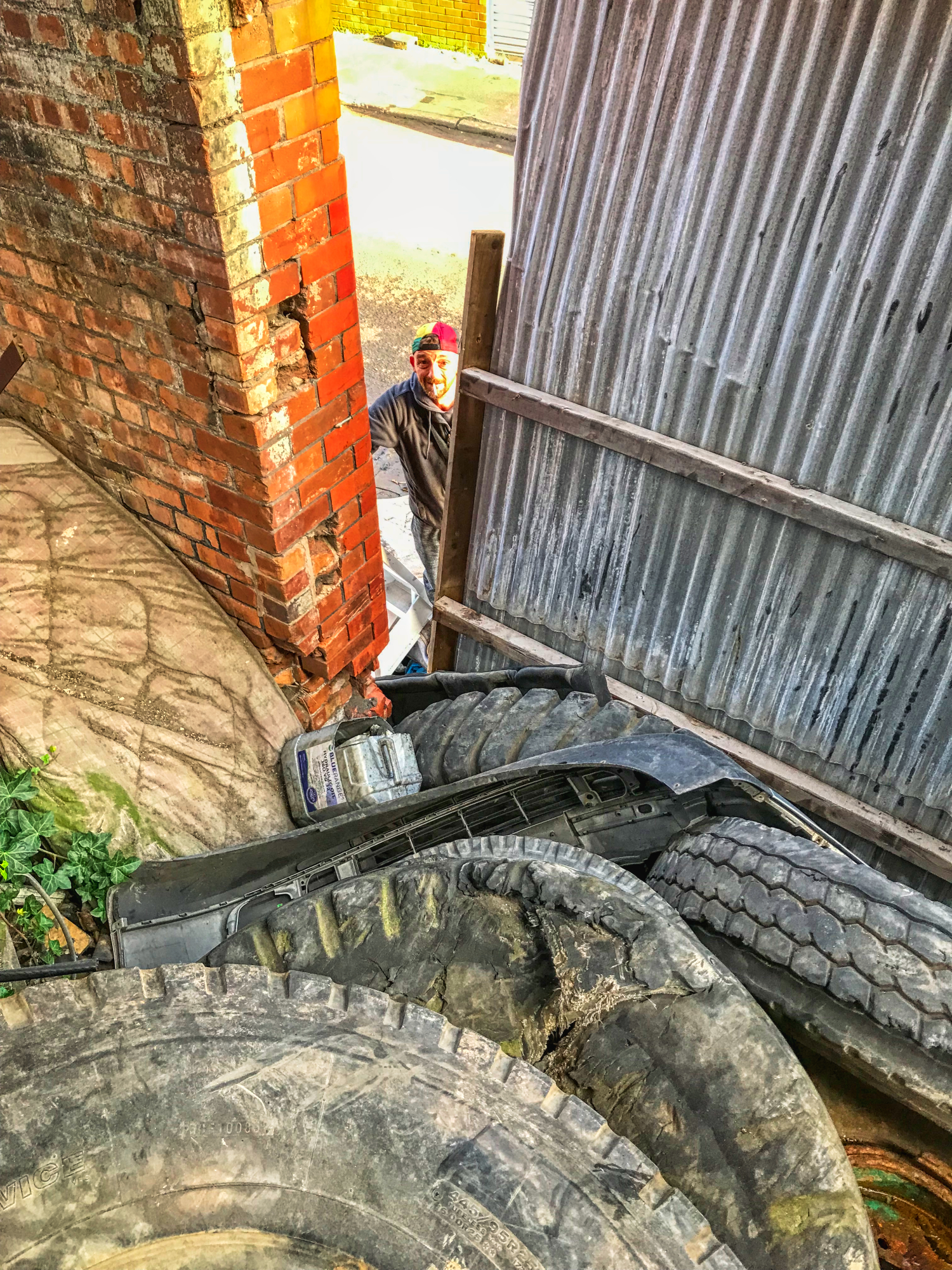 There was an exit and escape from all this, down a mountain of mouldy tires. Taking extreme care not to step in the middle of one, I laboured down toward a corrugated fence that needed to be pulled a little in order to escape.

It was apparent that we were indeed not going to see much more besides one of the most deprived areas of Liverpool today. 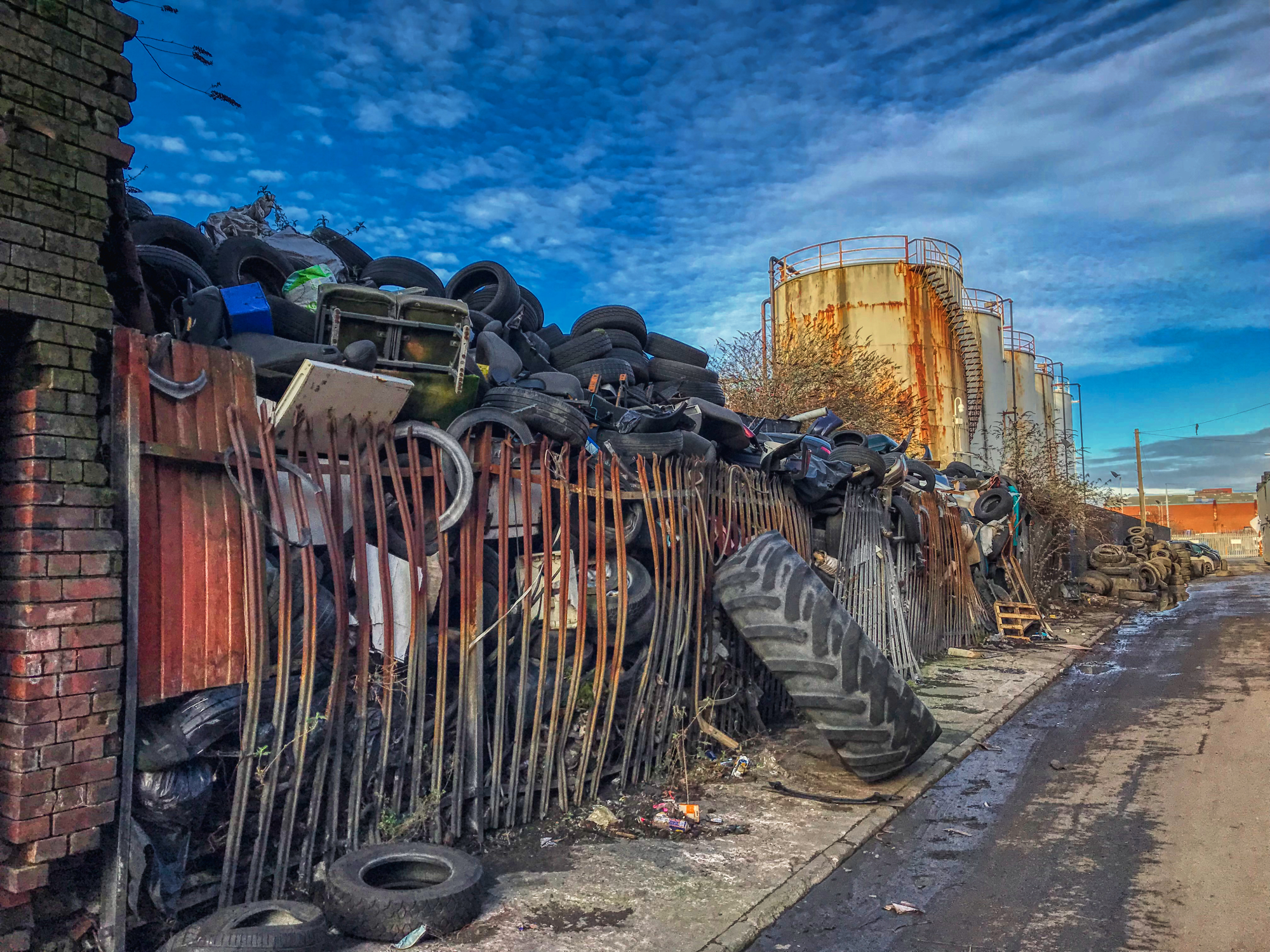 The rusty fence struggles to contain the masses of used lorry tires. Burning them would create a huge black smog that could be seen from Dublin. 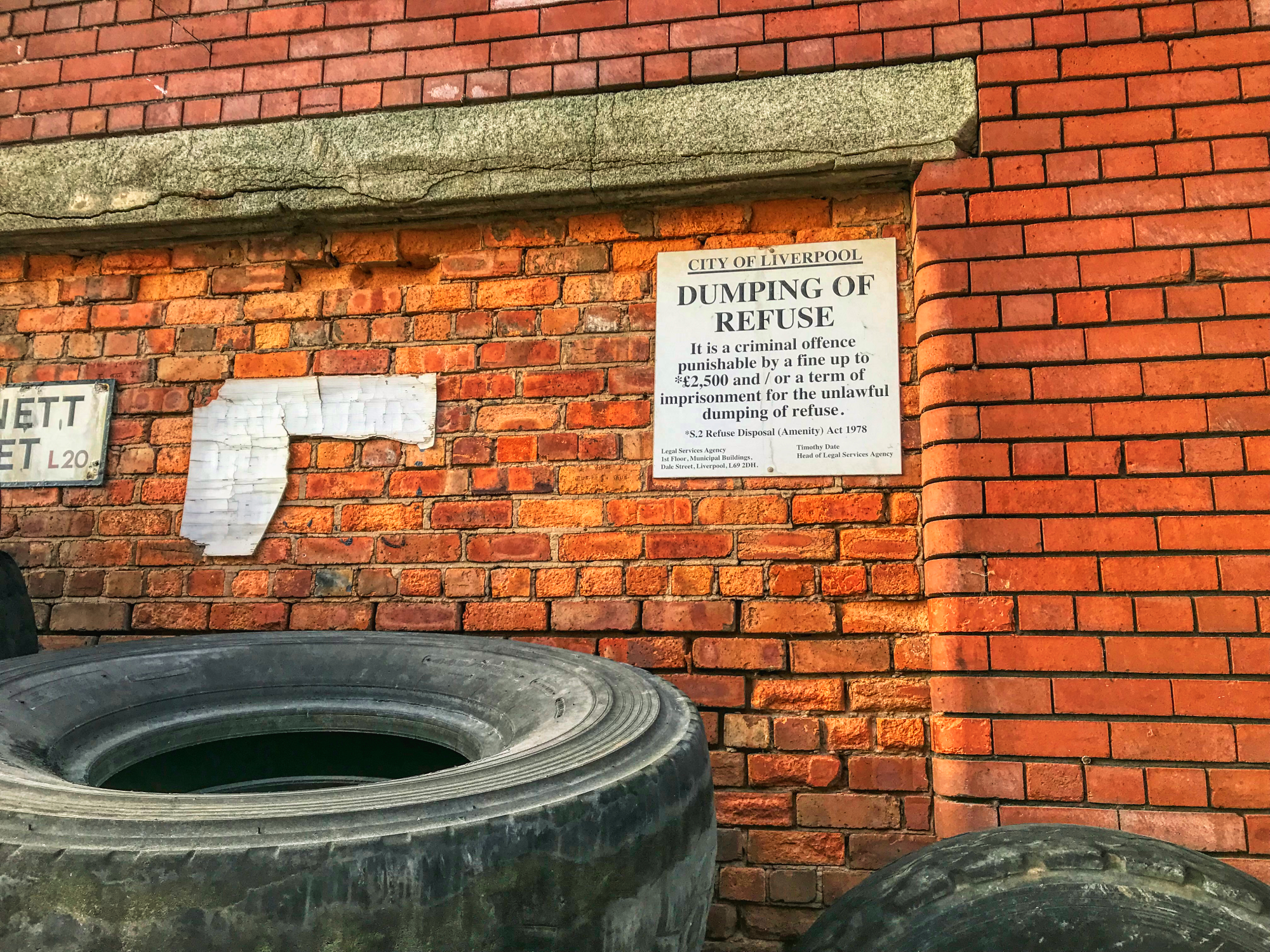 …'give me a fucking break, are the fly-tippers deliberately taking the piss?'…

Within a few more years vehicles will no longer be able to drive down Dunnett Street. The tyres will rule the neighbourhood, with the rats coming in a close second. 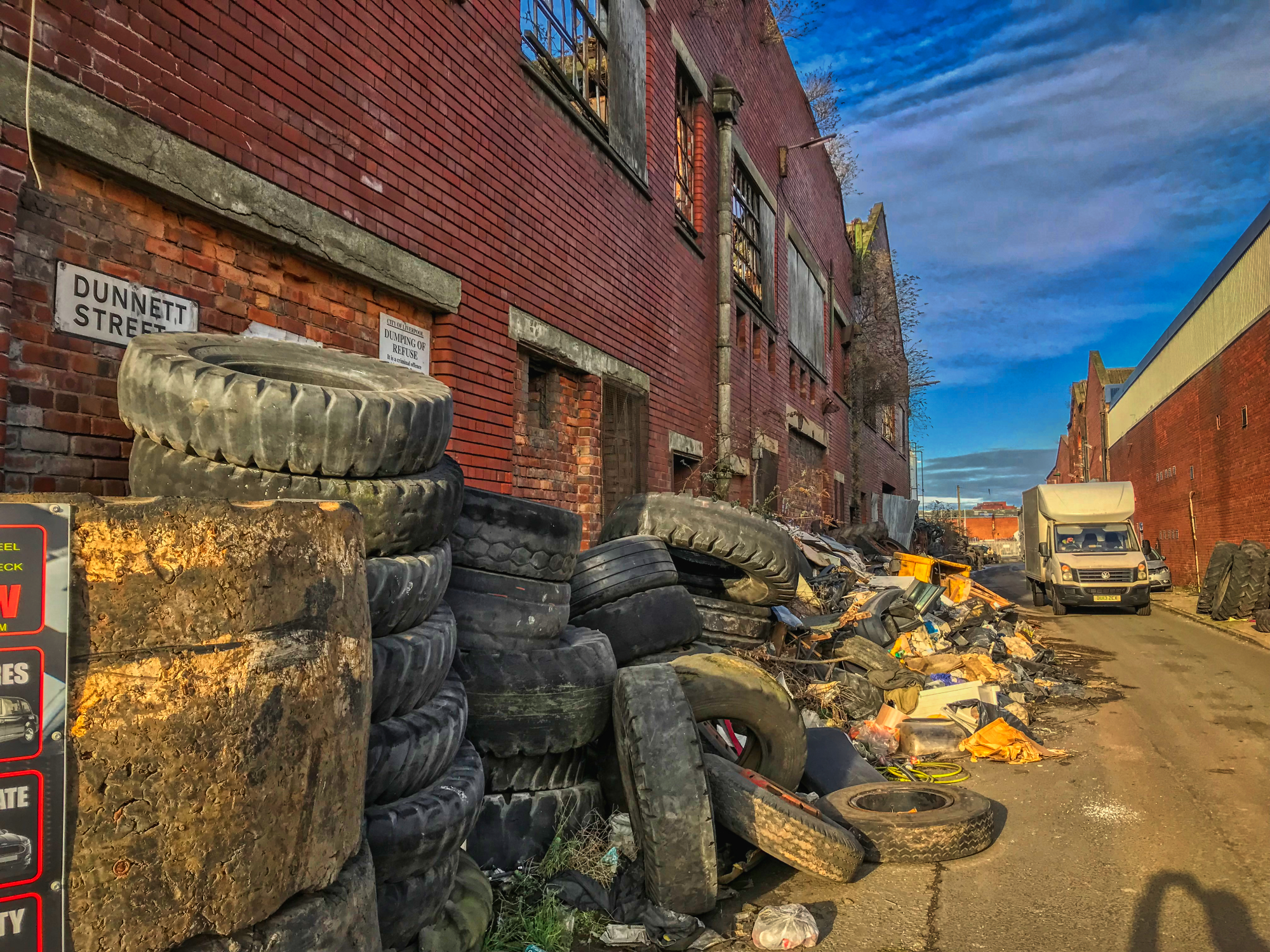 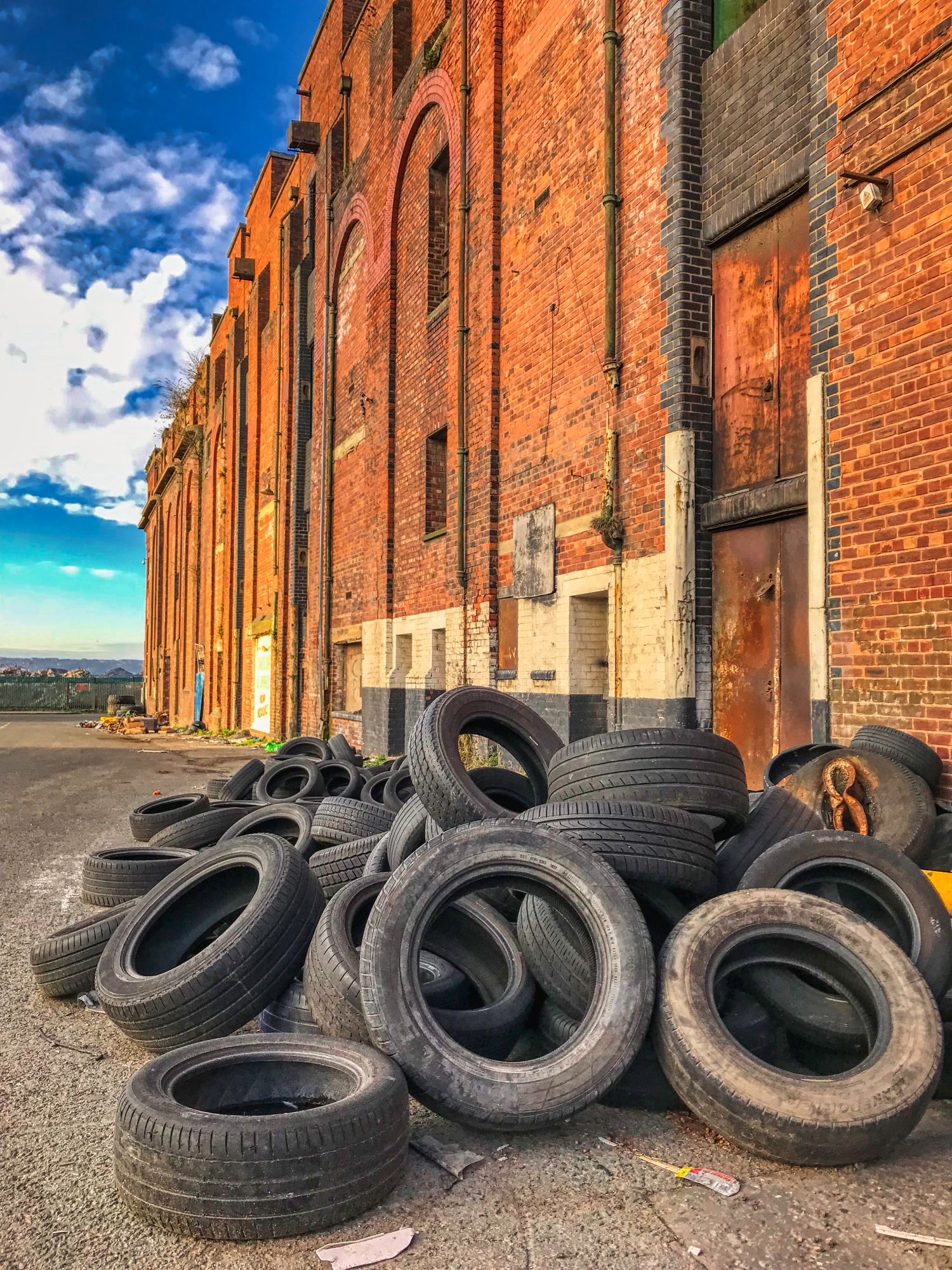 Walking down the length of the previously owned ‘Sandon Motor and Engineering Co. Ltd, I felt I had seen enough used tyres to last me for some time. 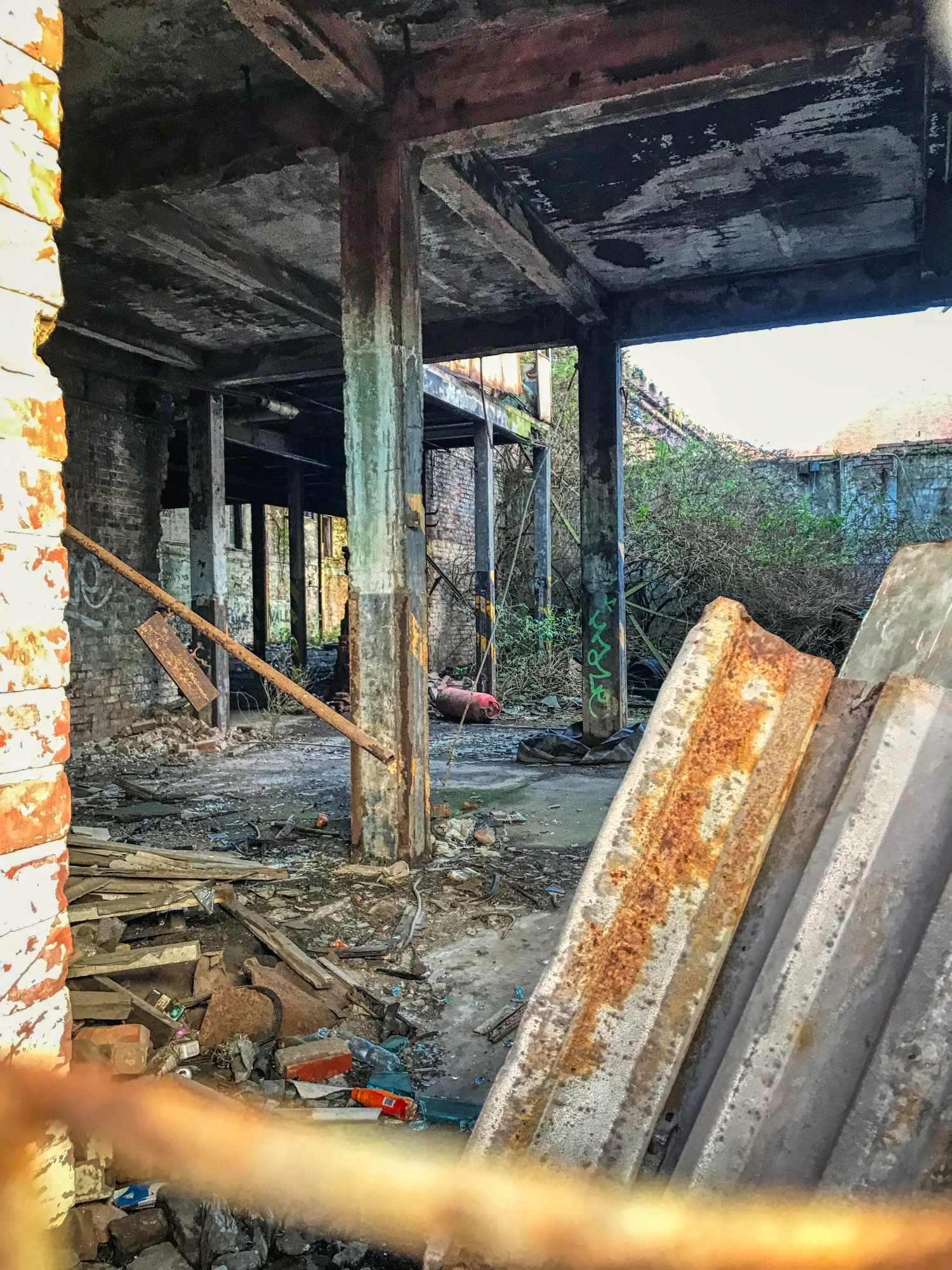 With a quick look through the old gates and at the wonders through the fencing, we reluctantly left Sandon Motor and Engineering Co. Ltd and moved on.

Tyres, never a more boring thing. I am surprised it was so quiet being in Liverpool. You think it would be heaving with yooths!

I am surprised it was so quiet being in Liverpool.

A mile south it would be, this is the deprived area of Bootle, the deserted docklands part where you come to dump your masses of tyres. Tyre fetish types would be serial orgasming.

That's what all the used condoms would be from 🤣 This was why we really went there.. 😀

Wahahahaha!!! Tyre fetish that will do it!!

I see the tyre mountain is still there!!

Please don't tell me that you have tried this one, I mean.., we were truly desperate!

I wish I was nearby would love to collect all the tyres and build my own punching bags.

Tired of tyres, one mans trash anothers fortune..., mountains of them!

Nothing good comes along..., except breeding spot for them mozzies.

Hey @slobberchops, here is a little bit of BEER from @joanstewart for you. Enjoy it!

That is a lot of tires. I would have steered clear of them. Around here the hornets love to make nests in them. Not that I am really afraid of wasps or hornets, but getting stung isn't my favorite thing to do either. I guess it probably depends on the time of year you visited though.

I guess it probably depends on the time of year you visited though.

I see them a lot, piles of them. This was in January though, no insects at that time of year.

Congratulations @slobberchops! You have completed the following achievement on the Hive blockchain and have been rewarded with new badge(s):

And it is said that the money is on the ground. So many things, and even more like a building that could be turned into a really attractive place and still functional. But you need willingness and, of course, money.

It's so great to click pictures when the sun is shining bright! 🔥

What one would remember from this place be tyres.

That metal fence struggling under the weight of the tires is something else. I wouldn't want to be standing beside it when it let's go.

Hiding a dead body in a stack of tires lmao 🤣. Lift up a tire and see a skeleton lol

Ladder traps - you're probably right that it's best to avoid those when possible.

Ladder traps - you're probably right that it's best to avoid those when possible.

They snap on your foot and it fucking hurts! It happened on another 'Tale' yet to be told. To me this looks like a painting. The contrast, the angles etc etc... One of the masters could have made millions on this piece. It could be you!!!

Turn it into an NFT and your "wasted" day will be well worth the time. :-)

I do like that snap, it's the best thing that came from this. NFT's? Expensive to mint, no guarantees and ETH.., a chain I keep well clear of due to excessive fees.

Hill of Shit could be a good album title by the band Mountain of Tyres. I imagine them as some variant of doom metal.

At least you had a nice day for it.

Blue sky and freezing. I was baited out again last January.

I expect that's t-shirt weather up your way.

Hey @slobberchops, here is a little bit of BEER from @steevc for you. Enjoy it!

Many of the things you find during your Urbex that are kind of valuable cannot be taken home with you for your use, are these tyres one of such things? One is free to take as many tyres as they want from here isn't it?

One is free to take as many tyres as they want from here isn't it?

As these are on a public road.., one is free take them.. yes.

Alright. But I've just chuckled at a thought, the ones inside the building are people still free to take them?😅