In today's edition of YIYL (You Invest, You Lose), We head back to the dumpster fire that is centralised exchanges, they've been in the news a lot lately as the FTX bank run has opened up their books and we can see that businesses in this space, regardless of how large are clearly not well capitalised.

In FTX's case, a lot of their balance sheet was made up of illiquid loans and illiquid shitcoins that would take months to unwind and there is no guarantee those assets would fetch what is presented on their books.

People freaked out and started to redeem their funds and because assets didn't meet liabilities, they were forced to pause withdrawals.

So why do I mention FTX in a post about crypto.com?

Well, they've not been the greatest custodian of funds, if they're not wasting it on massive marketing campaigns, they're mistakenly sending it to the wrong people.

They also have their own shitcoin, which we all know rugged the previous holders. They had a coin MCO and forced MCO holders to swap it for CRO, so they could dilute everyone, it was a total shit show so it's safe to say they've not been squeaky clean.

There was also a hack on crypto.com in January of this year where 483 accounts lost a combined $14 million. Come on people, where there is smoke there is fire. 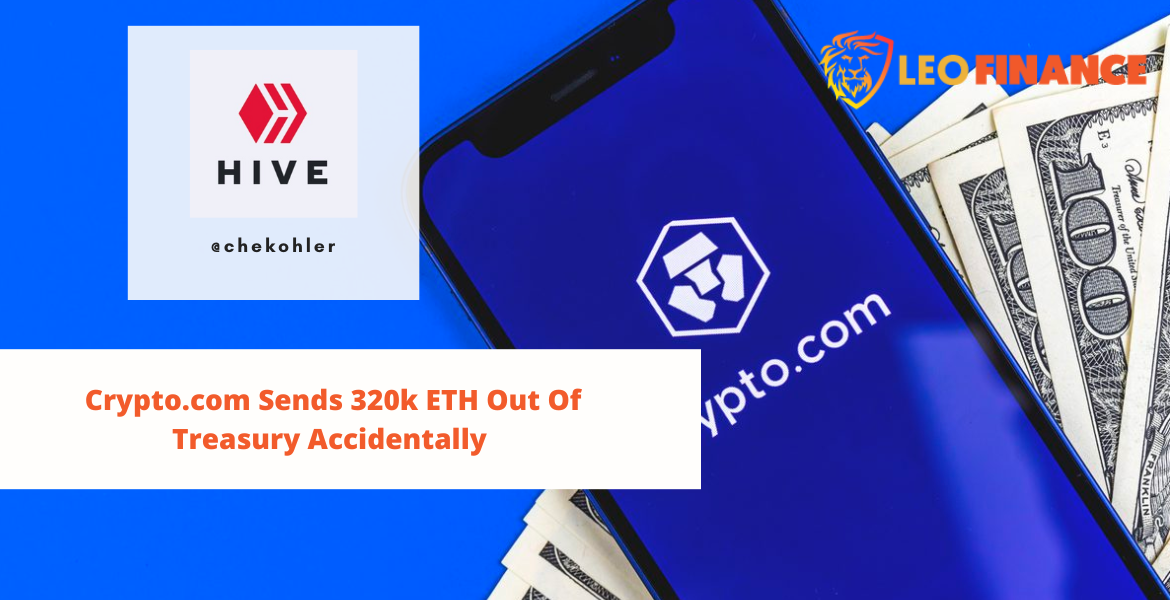 The fails keep piling up

If you were holding funds on crypto.com, tell me would you feel more or less comfortable after this interaction on Twitter recently? A user watching their wallets on Etherscan posted screenshots showing a massive flow of crypto from the Crypto.com cryptocurrency exchange to another exchange, Gate.io.

Now, this is already something concerning, you'd fear the worst in the current market, that they were trying to get funds out before they announce a shutdown or something.

If I had funds I'd be questioning a move like this and freaking out too.

"It was supposed to be a move to a new cold storage address, but was sent to a whitelisted external exchange address. We worked with Gate team and the funds were subsequently returned to our cold storage." He later clarified that all of the funds were returned.

Twitter users, reasonably, reacted in horror at the revelation that the platform had accidentally sent such a substantial portion of their funds elsewhere in a careless mistake, and that such a monumental mistake was even possible.

They were lucky that they erroneously sent the funds to another exchange and one who agreed to return the funds, imagine it was some nym with a purchased KYC account who could tumble those funds and it was never to be seen again?

This is not the first time Crypto.com has erroneously transferred funds; in August of this year, they sued a woman to whom they'd accidentally sent $7.2 million that wasn't hers. So they clearly have a history now of mishandling funds so why would you be trusting them with your funds?

Now if that hasn't scared you enough, crypto.com has also released it's balance sheet, with 20% of it shitting in an illiquid shitcoin like Shib, why would thar give you any sense of confidence?

If I were a crapto.coom user I would be liquidating as fast as possible, fortunate might not favour the brave on this one. If they do end up putting you in forced hodl mode, remember me, remember this warning and remember that you ignored it because you wanted "yield"

Who TF is Jessie? Custodians do what custodians do. That's my Hive perspective. !invest_vote

Hive has it's own trust assumptions and liquidity risk

In fact it might not have been a mistake but on purpose. There was an audit at gate.io and they got those ETH just in time to show something in their balance. Unbelievable what those guys do with customers funds. DeFi (for now at least) is dead, it can´t be trusted.
It was also too good to be true. Nobody can reasonably promise 20% or more APY. Even with the HBD it is not fully clear to me how it can sustainably work.

Oooh I didn't know about that, some serious accounting gimmicks going on right now as companies and protocols/techcompanies with a token try to cover their arses. A lot of these "deFI' services have liquidity on exchanges that now went tits up, so how can they be considered safe

HBD can offer 20% until you try to realise the gain and you see there's fuckall liquidity to sell your tokens, sure it works when there's small amounts and you can make an insignificant return on $1 but when you scale it, and people are putting in millions it quickly unravels, Terra Luna is just an example of that

It is extremely unlikely that this is an accident.
Both crypto.com and gate.io included that ETH in their asset report.
They'd rather look like fucking idiots than not have ETH reserves.
It's wild.

Even with the HBD it is not fully clear to me how it can sustainably work.

What you are implying here is that, not only can Hive not generate an average return of like 1% to make up for HBD yield, but also HBD yield will never change even though it's a variable number that can be changed at any time.

For example, if there is 10M HBD in circulation, and Hive market cap is $100M, then we have a debt ratio of 10%. After a year, we owe the HBD holders 2M more HBD, which is only 2% of the total Hive market cap. Thus Hive only has to go up 2% that year to pay for the yield. Is this unsustainable?

On top of all this you're not even factoring in inflation either. Everyone knows the value of fiat goes down. This can also be subtracted from the 20%. If you think inflation is 8% then 20% APR is really only a 12% return on value. And if that is true, that USD has been devalued 8%, then Hive token price should see an increase of 8% to reflect that, which is already magnitudes more than enough to pay the HBD yield.

As long as the market is small enough that you have a central actor to conduct open market operations you can keep it within its bounds, so sure it can be an insignificant market that a few actors manage the peg but the moment it had any scale it would fall on its arse

Anyone with 15 minutes can head to an exchange and see that HBD is a roach motel with no natural buyers of any scale to get you in and out of it, 20% APR is fine like I said for someone holding a few bucks, but any reasonable size, it doesn't factor in the time decay it would take for you to unroll that position

I've liquidated everything that wasn't locked down on the site as it's just not worth the risk to leave it there.

Some funds can't be moved yet so there is nothing that can be done about that for now. I do hope that they are actually solvent as i love their app and their card. They have made crypto so easy to use in the real world and have been earned me a nice bit of funds as well from their token and the cashback offers.

Everything is easy when its a centralised database and that's what shitcoiners don't get, centralisation is efficient. As for their product its in itself a self defeating service, moving IOU's around I can do even cheaper and better with the banks so who is their TAM?

A small niche of people who are willing to take custodial risk on unregulated securities? That's not enough to build a business around and that's evident by their accounting practices and how they handle their business.

You have a lot of work writing lately huh? , well in crypto these reports will be rarely stopped, there are a lot of shit shows going on 😄.

I didn't know what Stayoutherz commented but it seemed quite impossible that they accidentally did it so his explanation makes a lot of sense to me.

Lol it's like they handing me free ammo to keep shooting these shitcoins and shitcoin casinos down, I am honestly having a ball. If people want to ignore it, that's fine but it's all documented here so anyone can share it

And kris said All is well and no FUD please.

I did see pentoshi's screenshot of paused withdrawals but can't validate if it was true.